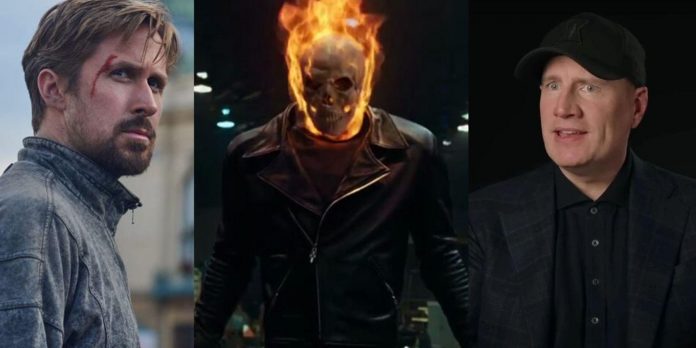 The idea of Ryan Gosling’s presence in the MCU is certainly tempting, especially for Kevin Feige. The boss of Marvel Studios has now responded to Gosling’s comments about wanting to play a version of the Ghost Rider from the Marvel cinematic universe.

Ghost Rider is the name of several antiheroes in Marvel comics, the first of which was motorcycle stuntman Johnny Blaze. The character first received a film in 2007 starring Nicolas Cage (also with Gosling’s longtime partner Eva Mendes as Roxanne Simpson). In 2012, a sequel titled Ghost Rider: Spirit of Retribution was released. Both films received poor reviews from critics.

After Gosling told Josh Horowitz on Happy Sad Confused that Ghost Rider is the only superhero he wants to play, Feigi was able to spend some time during Comic-Con in San Diego to respond to Gosling’s comments. “Hey, man, if Ryan wants to be a Ghost Rider…,” Feigi told MTV News when he learned of Gosling’s offer. “Gosling is incredible. Ryan is amazing… I would like to find a place for him in the MCU. He’s dressed like Ken on Venice Beach, and this weekend the press is getting more attention than giant movies. It’s amazing.”

Norman Reedus from The Walking Dead, who played the fan-favorite character Daryl in the series, also hinted at his interest in the role of the Ghost Rider. Gosling and Reedus are certainly two great candidates, especially when you consider that both actors have played harsh roles in their filmography (for Gosling, a vivid example of this is “The Place under the Pines”). There were also rumors about Gosling playing the role of Nova/Richard Ryder, a hero who is a member of the intergalactic police force known as the Nova Corps, for which he received abilities including increased strength, resistance to injury and flight. However, Gosling quickly denied the rumors.

Although the Ghost Rider movie (or TV series) is not planned for Phases 5 and 6 of the MCU, with the introduction of Mahershala Ali’s Blade and other supernatural elements, fans should not rule out the possibility that the project will get the green light. Until more news comes out, fans can see Gosling play another action hero in Netflix’s “Grey Man.” The Russo Brothers’ directorial film, released just last weekend, has already received the green light for a sequel and spin-off.