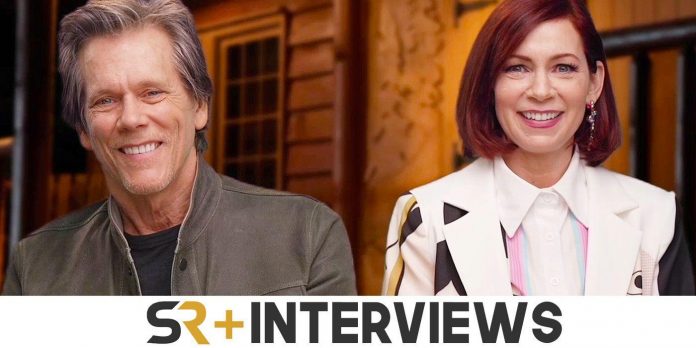 The film tells about a group of queer teenagers whose parents sent them to a gay conversion camp. Naturally, none of them are too happy to be there, and although they are connected by their common community, things are getting worse in the camp.

Related: They / They should avoid the serious socially conscious mistake of horror

Screen Rant met with Bacon and Preston to talk about Them/Them, including some parallels with Friday the 13th, why the most difficult scenes to watch are the most important, and much more.

Screen Rant: Kevin, you starred in one of the most iconic slashers of all time, and Friday the 13th is firmly ingrained in the DNA of Them/Them. Did you have any memories of filming Camp Crystal Lake?

Kevin Bacon: It was something we definitely talked about. John [Logan] and I were discussing [it], and there was something about going back to a real camp on a real lake. Friday the 13th is Blairstown, New Jersey, and that was rural Georgia. I like being outside. I like the forest. So I was really happy to be there.

Carrie, your scene with Theo was hard to watch, but it seemed to be an important part of the demonstration of the real horrors that the film tells about. What was it like to deal with this and this character who is just very sinister?

Carrie Preston: Well, you start by not playing the villain. You’re trying to think of a person as someone who does this and behaves this way for some reason. I think Cora thinks she’s really saving Jordan, Theo’s character, with this scene. Then there are all the levels of complexity that go into how she’s going to achieve that. There were things I had to say that really upset me, and I thought, “Oh my gosh, it’s terrible to tell someone.”

But this is the essence of the film. This is what the film is trying to say about the strange fear we were talking about; how to describe it. I think it is important now, and in particular, to cover such stories. And in this package of funny thrillers with panic from the jump, there was a brilliant move by John Logan.

Kevin, I loved seeing you as the villain. It was another stroke of genius. You’ve played villains before, but I feel like it has a lot of interesting angles to dive into.

Kevin Bacon: I loved playing him. I think John has created a really interesting character in the sense that if you really don’t listen to what he says, but listen, and you kind of observe his ease and comfort in the way he delivers it, you could almost sit and say, “Yes, there is some”that’s the point.” It was kind of our goal for him to be a kind of soothing voice of understanding that would then get a chance to address.

Summary of the book “They/they”

A group of teenagers at an LGBTQ+ conversion camp are subjected to disturbing psychological methods while being chased by a mysterious masked killer.

Come back soon to find out the rest of our interviews with the cast and crew of They/They!

Star Wars Eclipse Could Take 3-4 Years To Be Released