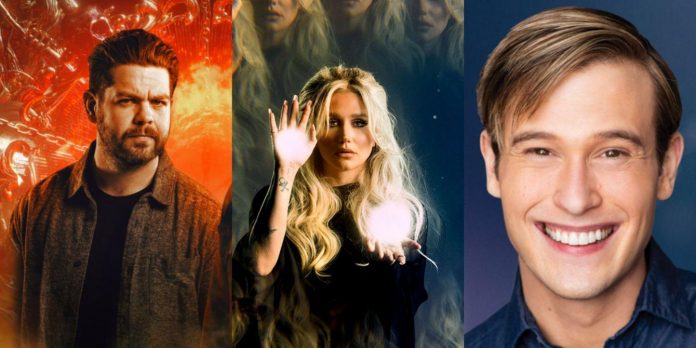 If a haunting is to be had, what better vessel to terrorize than someone with the world at their fingertips? While the world of paranormal investigations has made household names out of the previously unknown, it’s also drawn some souls used to living in the limelight into the cellars and shadows of the dark thereafter.

Be it macabre curiosities, unsettling experiences, or the need for closure from the deceased, celebrities from A to D have used their names and resources to tap into the unexplainable. From sharing their encounters to attempting to close the gates of hell, there’s a variety of celebrity-fused paranormal reality content to choose from that imbues viewers’ fears of the unfathomable into someone broadly more familiar.

Warrior, cannibal, and conduit for the supernatural, Kesha is back, but this time on (or as) an entirely new medium. Though viewers got a peek into her “Crazy Beautiful Life” on MTV back in 2013, the docuseries was rooted more in music and family than frights. Conjuring Kesha takes the original Tik Toker on a decidedly darker journey.

RELATED: The Best Paranormal Reality Shows, According To Ranker

With a different co-host each episode, Kesha brings her friends and “Animals” into the likes of a “creeper” prowled prison infirmary and an ominous opera house. Conjuring Kesha doesn’t just look to make contact with bedazzled REM-Pods, but earnestly seeks to turn love into light.

Maybe the most popular of the paranormal platforms, the Zak Bagans-fronted series has given viewers the creeps for 20+ seasons. Investigating everything from the Stanley Hotel and Winchester Mystery House to The Comedy Store and Alcatraz, Ghost Adventures has left few storied places of possession untapped.

Home to more than Bagans and his crew, the adventures have included quite a few celebrities, with Jeff Ross, Loretta Lynn, Holly Madison, and Kane Hodder just to name a few. No celebrity was more affected than Post Malone, who not only starred in his own episode, but was purportedly cursed after touching a dybbuk box in Bagan’s Haunted Museum and incurred a string of calamitous occurrences.

The OG wraith wranglers, Jason Hawes and the TAPS crew have an investigative catalog spanning 18 years, 200+ episodes, and three platforms. Still active in 2022, the Rhode Island-based investigators have even invited a few celebrities alongside them on their search for proof of the paranormal.

Between enshrining the inimitable Meatloaf in night vision over multiple investigations, bringing WWE wrestlers in for three of their Halloween specials, and giving the Real Housewives of Atlanta their own season 6 episode, Ghost Hunters was and is a fun way to look past the celebrity facade and into the universal fear of what comes after.

More than just ghost stories, Famously Afraid covers everything from clairvoyance and portals to UFOs and invisible touch. With three different celebrities sharing their experiences in each entry, the uneasy trajectory of each episodic anthology is decidedly dark and unpredictable.

Whether it’s Hal Sparks realizing the time lapse he experienced as a child was related to abduction and that generations of his family members were tethered to extraterrestrial experiences, or Walt Jr. himself, RJ Mitte, recalling the entity he saw the night his grandfather died, the stories therein range from deeply unsettling to surprisingly comforting.

After a reality-shifting experience in Joshua Tree National Park, Demi Lovato not only wanted to uncover more about the celestial visitors they’d always believed in, but awaken others to the fact that they’re not alone. With their sister Dallas and best friend Matthew, Demi took to the skies and E.T. hotspots in search of contact.

Playing out as a four-part investigative road trip, Demi also enlists ufologists and eye-witnesses to elaborate on the evidence behind their adventure. A fun journey (especially for YA viewers) through enlightenment and belief, Unidentified dares the skeptical mind to ask “what if?”

Airing for one season back in 2006, VH1’s Celebrity Paranormal Project was well before its time. Taking a route similar to MTV’s Fear, the show sets up base camp in various “haunted” locations and separates its celebrity investigators into teams. Armed with thermal imaging and self-facing cameras, viewers experience the frights and reactions as if they were there themselves.

The only show in history to pit comedy icon Gilbert Gottfried against a ghost while also hinting at a potential relationship between Jerry from 2gether and former American Idol contestant Kimberly Caldwell, Celebrity Paranormal Project is an engaging ride through the mid-aughts that almost certainly would have thrived today on Discovery+.

A combination of Hollywood Medium and Celebrity Ghost Stories, Lifetime’s The Haunting Of… takes celebrity ghost encounters into “The Further.” Bringing medium Kim Russo and the affected celebrity to the scene of the haunt, The Haunting Of… uses psychic sensitivities to answer the unexplainable.

From Auto-tune whiz T-Pain to the ever-engrossing actor Giancarlo Esposito, Russo uses her gift of contact to unburden the afflicted. The Russo experience was so inspiring for one guest (and her mother) that it would trigger her own journey into paranormal investigations, which now exists, six years later, as Conjuring Kesha.

Taking E!’s unparalleled access to celebrity into The Great Beyond, medium Tyler Henry shared his gift of clairvoyance with an array of prominent personalities over four fruitful seasons. Henry brought solace, enlightenment, and even warnings to the noteworthy names looking for answers.

Some of Henry’s standout readings include an emotional journey with Ronda Rousey dealing with the loss of her father and connecting a housefire to Kacey Musgraves’ grandmother’s passing.

Conceived on a Black Sabbath and prince to the Prince of Darkness’ throne, morbid intrigue runs through Jack Osbourne’s blood. Alongside paranormal researcher Katrina Weidman, Jack and his team of mediums have investigated documented paranormal hotbeds like Skinwalker Ranch in Utah and the Iron Island Museum in Buffalo, NY.

Now 40 episodes deep on Discovery+, Jack offers comfort in familiarity to a show that stands on its own in the world of paranormal research. While his lure has manifested itself into additional shows on the same platform, none compare to watching Jack yell, “oh s–t,” as an SLS camera maps out a ghost climbing up a basement wall in Portals to Hell.

While every story is unsettling in its own right, firsthand accounts from Jeffrey Ross and Skyler Grey are especially unforgettable. Inspiring many of its celebrities to appear on other investigative shows in the years thereafter, Celebrity Ghost Stories would provide a gateway for viewers and the afflicted alike to step into the unknown.