Home Entertainment Kenobi is already mocking how much older Obi-Wan looks in A New... 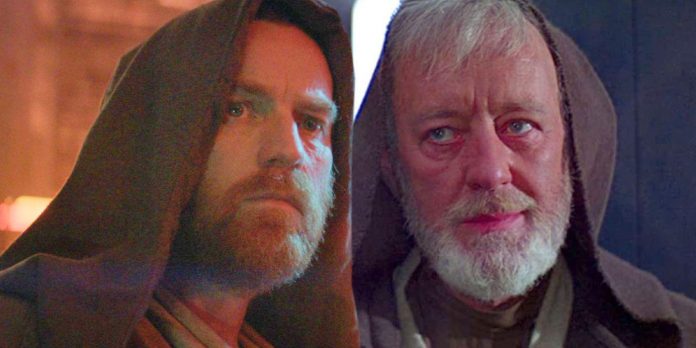 Obi-Wan Kenobi is already joking about the age of his protagonist, apparently mocking how much older he looks in Star Wars: A New Hope compared to his own TV show. When Star Wars first came out in 1977, there seemed to be no problem with the great Alec Guinness taking on the role of a Jedi master, as Obi-Wan Kenobi’s age and backstory were not fully revealed. Only with the development of the history of “Star Wars” and, in particular, with the choice of Ewan McGregor for the role of Obi-Wan Kenobi in the prequels, there was some problem, which is that Obi-Wan is rapidly aging in a relatively short time. the space of time.

This is compounded by Obi-Wan Kenobi, who takes place 10 years after Star Wars: Episode III — Revenge of the Sith. McGregor reprises his role in the series, but this means that in the universe Obi-Wan transforms from a 48-year-old, similar to McGregor, into a 57-year-old and gray-haired Guinness (who was about 63 years old). old at the time) in just nine years. This is an inexplicable gap in logic that has yet to be properly addressed, but Obi-Wan Kenobi is having a little fun with it.

In the 2nd episode of Obi-Wan Kenobi, a Jedi tries to protect Princess Leia Organa (Vivien Lyra Blair) on Daiya. Leia does not fully trust the person sent to save her, and also, in accordance with the same personality that she demonstrates in the original Star Wars trilogy, finds a lot of room for insults and jokes. In particular, Leia mentions a very old Obi-Wan several times. It may just be because he is much older for her — Leah is now 10 years old — but considering that her adoptive father, Bail Organa, is played by 66-year-old Jimmy Smits, it seems that it is a little more. The comments certainly seem harsh and could be Disney’s way of having fun and making jokes.

Leia’s constant reference to Obi-Wan as old, even if it’s not, can certainly help establish that the character is older or seems older, laying the groundwork for a possible change in appearance that will occur. Star Wars rarely leaves anything unexplained, so it wouldn’t be surprising if there were more explanations for why Obi-Wan looks so much older in A New Hope. This may not fully manifest itself in Obi-Wan Kenobi, but at least it can continue with new barbs from Leia. At least it’s a mocking and rather ironic admission of the problem, because if Leia thinks Obi-Wan looks old now, how should she feel when she glimpses him in “New Hope”?

Various theories have tried to explain the “plot hole” of Obi-Wan’s age over the years, including the simple fact that living in a desert with two suns for 20 years will inevitably make a person look much older, as well as the idea of Obi-Wan. – At some point, Van was exhausted by his Strength, although there is little that can support it yet. In fact, the timing and age of the actors are not so far away — McGregor is only 12 years younger than Guinness in “New Hope”, and there is a gap of nine years in the universe, so not so much. and in fact, the problem arises only because the first one looks younger. But considering how much his age has changed by this point, it may well be that Star Wars explains it, and Leia, played by Obi-Wan Kenobi, definitely likes it.

Rain and Kim Bum together in hilarious sneak peek of fantasy...