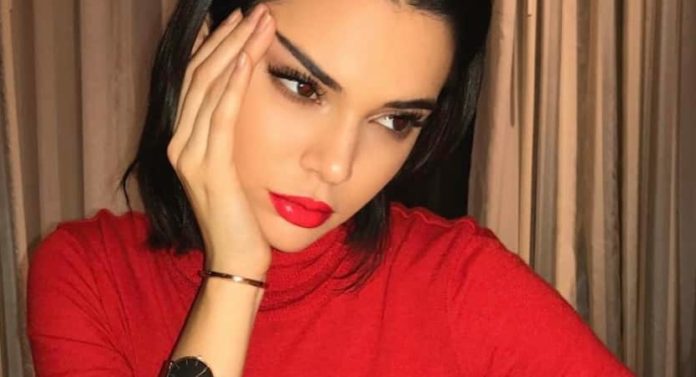 Kendall Jenner continues to wreak havoc on the catwalks. The star recently paraded for Tom Ford. And its appearance caused a buzz!

Kendall Jenner impressed her fans during the Tom Ford fashion show ! Indeed, the bomb lit the podium during its passage! Quickly discover the images of the show !

KENDALL IGNITES THE TOM FORD PARADE!
Kendall Jenner is still very successful with creators! Indeed, the pretty brunette collaborates with many brands . She also participated in the latest Burberry campaign . But that’s not all ! The 24-year-old woman is not content with fashion shoots. She also loves to parade on the catwalks of fashion week!

Yesterday, the bomb was the star of the Tom Ford parade in Los Angeles . Indeed, Kendall Jenner made an unprecedented appearance on the catwalk. And the least we can say is that the star has insured ! Her mom released the first images of the show on Instagram. We can then see Kendall with a sublime black lace dress . And the latter is parading like a pro! We love !

KENDALL JENNER IS WREAKING HAVOC ON INSTAGRAM!
Kris Jenner couldn’t help but congratulate her daughter . She then wrote in legend: “My Kenny marches for Tom Ford in Los Angeles. Too proud ” . And Internet users reacted very quickly to this message! Indeed, they congratulated Kendall Jenner in turn. “Wow, sublime” , “She is breathtaking” , “What a beauty” , ” Incredible ” can we read in the comments. Enough to please the top model!

Kendall Jenner may parade for the biggest luxury houses, the star still continues to appear naturally on her Instagram profile ! Indeed, she recently released a photo of herself in her bathroom. She then appears without make-up , with a mask on the face. Like what, the bomb does not lack self-mockery ! And the latter remains authentic on the canvas ! We love !

A character will try to ruin Claire and Jamie’s relationship