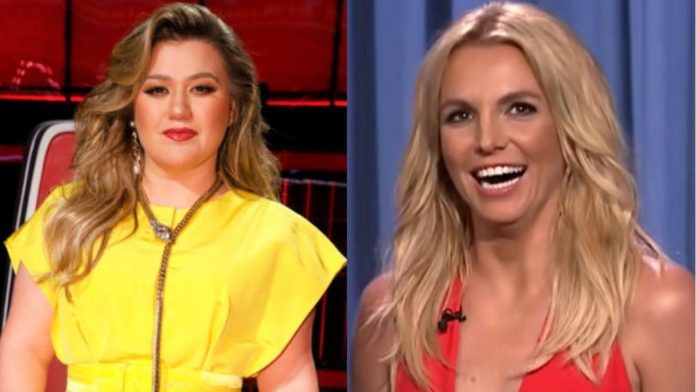 Britney Spears has proven that she has no problem calling out people who have offended her in the past, both indirectly and strikingly directly. Her parents and sister Jamie Lynn Spears often become the objects of the singer’s anger, mainly due to the fact that she was imprisoned for 13 years. Mickey Mouse Club graduate Christina Aguilera and, most recently, Kelly Clarkson. After the “Lucky” singer recalled some tactless comments made by Clarkson back in 2008, the talk show host and former voice coach reacted in a very branded manner.

For background: Kelly Clarkson appeared on Q100 Atlanta in 2008 — around the time Britney Spears had a mental breakdown and her life was taken over by her father — for an interview in which she joked about the incident with Britney shaving her head and her other disturbing actions that increase fame. for her 2007 album Blackout. After Spears referred to this interview in an already deleted Instagram caption, saying, “I don’t forget,” the American Idol champion did a cover of the former pop star’s song “Womanizer” on the Kelly Clarkson show, stating on the show’s Twitter page that she was “In honor of Queen Britney.” Watch Kellyoke’s performance below:

Kelly Clarkson did not directly address Britney Spears, and we can say that her “glorification” of the pop icon is a way for the winner of American Idol to congratulate Spears on a fabulous wedding with Sam Asgari. However, the performance, which took place just a few days after her comments in a 2008 interview surfaced, seems too casual (and “womanizer” is not entirely appropriate if we are talking about wedding wishes).

The June 15 episode wasn’t the first time Kelly Clarkson performed covers of Britney Spears songs on her talk show. The former voice coach sang “Toxic” during Kellyoke in February 2020, and in September 2019 she did a cover of “Till the World Ends”. Spears also mentioned in a recent Instagram post Kelly Clarkson singing her song “Everytime” in 2012, and the Crossroads actress tweeted: “This is a beautiful girl.”

We may never know if Kelly Clarkson has contacted Britney Spears privately to discuss her past comments, but we’ve seen the “Since U Been Gone” singer address personal issues through her Kellyoke songs in the past. In October, when the Idol graduate was in the midst of a complicated divorce, she changed some of the lyrics to Billie Eilish’s song “Happier Than Ever”, which many perceived as a blow to her estranged husband Brandon Blackstock. Instead of singing, “I have nothing to do with you, no. Because I would never treat me so shitty. You made me hate this city,” Clarkson changed the last line to “I understand you hate this city.”

It’s easy to understand why Kelly Clarkson’s interview in 2008 was hurtful to Britney Spears, even after so many years, and we hope Spears can somehow close this issue. As the newlyweds spend their first days of family happiness moving into a new home (next door to her ex-husband), Clarkson said she’s taking a summer vacation to spend it with her children, preparing for a major overhaul of the Kelly Clarkson Show. . Be sure to check out our TV program for 2022 to find out what premieres are expected in the near future.

I Never…: Series is Renewed for Season 3 on Netflix