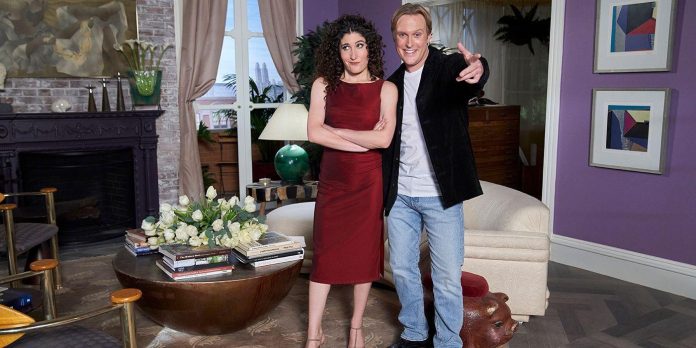 “Peacock” brings joy back to the viewers’ lives with the upcoming special sketch “Will He Kill you with laughter?” starring Kate Berlant and John Early, as the subtitle proudly notes. Having worked and laughed together for a decade, the comedy duo is launching an hour-long special with a wacky but realistic premise: the sitcom stars reunite in an awkward talk show hosted by Meredith Vieira, years after the end of their popular series and the litigation that followed it.

Earley is known for his hilarious work on shows like Search Party and the currently airing The Afterparty, while Berlant is set to star in the upcoming Prime Video series “Their Own League” and the movie “Don’t Worry, Honey.” However, their partnership is long before any of them, as the actors and comedians have been friends and creative partners since they met in New York in 2012. Not only have they appeared together in Search Party and shows like Life & Beth, they also used to work together on short films like 2019’s Rachel. However, after all this, will laughter kill you? it will be their first full-fledged special issue.

Screen Rant talked to Berlan and Earley about the various sketches they have chosen for the project, the trajectory of their partnership and how they hope to grow as actors and screenwriters with the hope that in the future they will create their own series based on the script.

Screen Rant: I know you two have been working together for ten years, but how did this comedic partnership start? At what point did you just click?

John Early: It was actually more of a sexual partnership before it turned into a comedy. [Both laughing]

Kate Berlanti: It happens so often. We met on the set of a friend’s short film in New York 10 years ago, and we really instantly fell in love and found a common language. We just had a common language, which was kind of supernatural.

John Early: It was surreal. There was a coincidence of rhythm and worldview, and it was very similar to a mirror, a long-lost twin thing. It’s well documented, but in fact we just rested for two weeks. I went to Kate’s house, and after two weeks of hanging out, it was like, “I could just spend the night and make it easier.”

Kate Berlanti: Yes, he slept in my bed for almost a year. Probably two years. Being alone in New York is impossible!

John Early: When I ran out of underwear, I bought new Haines packages at Rite Aid or Duane Reade in Williamsburg. It was very sweet; we were very inseparable for a long time.

And almost immediately, literally on the first day, we said, “Sketch show!” We said, “We’re going to do a sketch show.” Our ambitions have changed over the years, but I think there’s a reason why this is one of the first projects that really got some support. I think we’re very suited to sketching; we have a million trillion ideas.

Which I love. There were already so many great things in this special issue that I thought: “Is it going to be a sketch show? Will we get more?” What is the intended journey?

John Early: We especially like sketching as an art form. I mean, I know. I think it’s kind of a little-studied genre. People do a lot of sketch shows, but there’s something very beautiful about these one-off things that can have their perfect little arches. There’s something more romantic about it. I would like to make another one and bring back the beavers and some other characters.

Speaking of Beavers, what is the process of collaboration when you decide what will happen? Do you have a million ideas, but you can only have 12 in one special? Are you fighting to the death, or how do you pick the winners?

Kate Berlant: Fortunately, we are really on the same wavelength. It is very unusual that one of us wants to implement an idea, and the other does not.

John Early: We have a very good mutual understanding of what doesn’t work. For this particular project, because it was just an hour and not some endless series where we could just do [anything], balance was important.

We knew there was a lot of competitive, ruthless energy in the interview with Meredith, so we needed to balance it with something sweeter, like Beavers, or something sillier, like dancing, but we didn’t argue about anything. It’s so silly, but it’s really what makes us laugh, you know?

Kate Berlant: No fighting. This is the simplest. For example, the story of hot caramel began as a joke that we just played in restaurants many years ago.

John Early: We asked, “Do you guys accept hot caramel?” to the waiter.

What was the impetus for the idea of something special in the first place, add how did you bring it to Peacock? Obviously, in these times, we all could use a little laugh. Were those your thoughts?

John Early: Yes, in a way, in the sense that we just wanted to do something funny first.