Home Entertainment Katanagatari: The NisiOisin Masterclass that no one talks about anymore 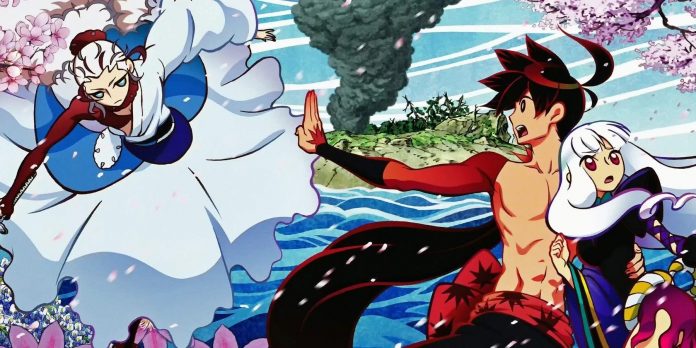 The popularity of the Monogatari series has increased dramatically, especially after Studio SHAFT released an anime adaptation of the NisiOisin supernatural detective novels in 2009. .

Series written by NisiOisin and having anime adaptations include the series Fall 2021, Pretty Boy Detective Club, as well as the author’s master class, which is not mentioned – Katanagatari, a series that is not actually related to the parts of the same name in Monogatari. Series, but includes several elements characteristic of a typical NisiOisin work.

Katanagatari takes place in Edo-era Japan, rich in vibrant sword fighting styles. Shichika Yasuri, the last head of the Yasuri clan, practices a unique form of sword fighting in Japan — Keto-ryu; a style of fighting without a sword. The user uses his body as a blade, but the Keto-ryu school is hidden deep in the mountains of a Japanese island.

Shichika lives in exile on the island of Fusho with his sister Nanami, until a strategist named Togame arrives, claiming to be looking for twelve unique swords called “Deviant Blades” created by the legendary blacksmith Shikizaki Kiki. Sent by the shogunate, Togame sees Shichiki’s strength as a valuable asset, but does not want to blindly follow their orders, having her own big ambitions. Together, Shichika and Togame embark on an adventure, traveling across Japan in search of Deviant Blades, but face the overwhelming power of the various enemies they encounter.

The name Katanagatari follows the same trend as the title of the most famous work by the author of NisiOisin, the Monogatari series. In Japanese, the word “monogatari” means “history”; however, the author manipulates various aspects of the word using similar words. The first part of the Monogatari series is Bakemonogatari, a portmanteau word containing “bakemono”, meaning “monster”; and “monogatari”. This actually makes the name something like “Monstory” in Japanese. This trend continues with various other words denoting different parts or arches of the Monogatari franchise, such as “nisemono”, meaning “impostor” or “fake”; “neko”, meaning “cat” and others.

“Katanagatari” is an interesting pun because “katana” clearly refers to a classic Japanese blade, while “—gatari” at first glance sounds like it evokes an earlier trend with the monogatari series, giving it a quality meaning “history”. but this is a deliberate deception. The word “Katanagatari” in general also sounds like it might refer to the act of collecting swords, especially because the “-gatari” part evokes the concept of assembling or collecting. Given Togame’s mission to collect all twelve deviant blades, this interpretation of the name fits much more than the more obvious combination of “katana” and “monogatari” to create something with a meaning close to “Sword History”, which would also make a lot of sense. Like any other work by NisiOisin, Katanagatari is replete with dialogues, and several scenes are devoted to the unique form of the exposition. In this sense, “Katanagatari” refers to the story of a collection of swords.

Some of the strongest elements of Katanagatari are the same strengths as in some of NisiOisin’s other works, primarily the interesting and vivid dialogues, the intricate relationships between the characters, and the solid world—building that make it quite exciting despite the slow start. The series also boasts 45-minute episodes rather than the standard 23 minutes, making it more time-consuming than most other anime with less than 12 episodes. The cast of characters is especially strong, the best character of the series is Togame. When the two main characters travel around Japan, meeting with the owners of various blades, the author’s creativity manifests itself, since some of the Twelve deviant blades turn out to be something other than blades.

Apart from the action presented by the journey of Shichiki and Togame, another element that makes Katanagatari particularly good is the fact that it also develops their romantic relationship in a vivid depiction of historical Japan. The animation style is unique, especially when it comes to character design. While it may not be exactly like other anime of its kind, Katanagatari boasts an avant-garde art direction that sets it apart, as does more recent anime such as Ranking of Kings. Overall, Katanagatari is a great anime both in terms of visuals and animation, as well as in terms of plot and characters; however, it may have suffered a bit over time.

Why Pokémon Black & White Was Hated When It Was First...