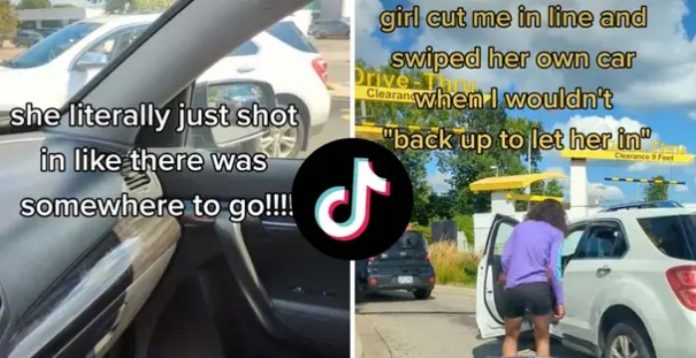 “Karen” went viral on TikTok because she threw a tantrum after crashing her own car while trying to crash into a McDonald’s queue.

Content creator Vidalia (lavendermintmom) filmed and shared a video on TikTok about a young woman getting out of a white crossover, both doors of which were scratched on the driver’s side.

The viral video, which has gained more than 8.7 million views, shows a woman standing near a car and shouting into the windshield of a TikToker recording her.

The text overlay on the video reads: “A girl crashed into me in line and stole her car when I didn’t “back up to let her in.”

♬ Funny Laugh no no no – Sound Effect

Shouting at TikToker, “Karen” bent down to look at the scratches on her car before the video was interrupted.

According to Vidalia, the young woman tried to “knock out” the window of her car.

“It was crazy, and she even tried to knock out my window. As a result, she got her cheeseburgers, although… I wonder if it was worth it for her,” she wrote in the comments.

In the updated video, TikToker also showed a tip on a woman trying to cut the McDonald’s queue. The text overlay in the clip reads: “She literally just shot, as if there was nowhere to go!!!”

In this video, which has gained more than 680,000 views, it is clearly visible how the customer is trying to squeeze in between other cars, instead of going to the end of the queue.

Vidalia said that the police had arrived, but the officer said that since McDonald’s is private property, he could not interfere in the dispute.

The angry customer also tried to lie to the officer, saying that TikToker cut her off in front of her and therefore her car was damaged, but the policeman did not investigate the matter further.