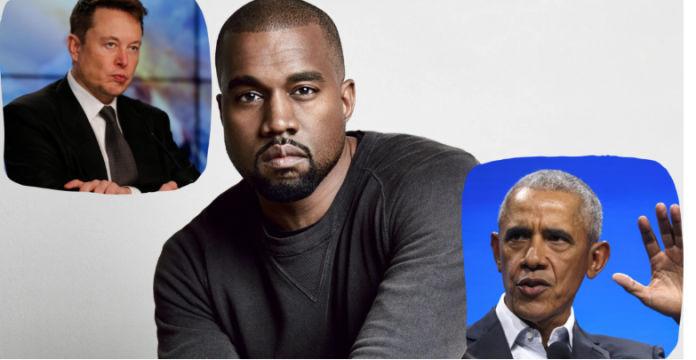 One by one, the scandals around Kanye West continue to be replenished. After breaking up with his now ex-wife Kim Kardashian, Ye continued to spread hate speech. His anti-Semitic comments led to him losing all transactions and his Twitter account again. Recently, the new owner of the social network account, Elon Musk, blocked Ye’s Twitter account because he posted a swastika praising Adolf Hitler on his wall.

Freedom of speech doesn’t mean freedom of reach. Negativity should & will get less reach than positivity. pic.twitter.com/36zl29rCSM

After his Twitter account was blocked, the rapper appeared on Instagram with a comment about Elon Musk. Among his comments was former US President Barack Obama. Although Elon Musk was his longtime friend, even when Ye broke the rules of the community, he had to suspend Ye’s account. But what did you say about Musk and Obama?

Kanye West came to Instagram with an observation about Elon Musk

Referring to the childhood photos of Elon Musk, the rapper posted his observation on his Instagram account. He wrote wondering if he was the only one or if someone else thought Elon Musk should be half Chinese. He also mentioned former President Barack Obama.

According to him, Musk can be a clone, just like Obama. The rapper apologized for using expletives, but then said he had no other words for the former POTUS. In the caption, Kim Kardashian’s ex-husband mentioned that Ye used Mark Zuckerberg’s platform to provoke a massive investigation into Elon Musk’s childhood photos. Having written this about Barack Obama and Elon Musk, the Twitter owner also responded to his comments.

The business magnate said: “I take it as a compliment!” Keeping calm, Elon Musk returned to the tweet, responding to the rapper himself. Do you think the rapper will survive among all these contradictions? What do you think about the comments the rapper just made? Do you think he will face any other consequences? Feel free to share your thoughts in the comment box below.

Obi-Wan Kenobi: One quote from each main character that summarizes their...