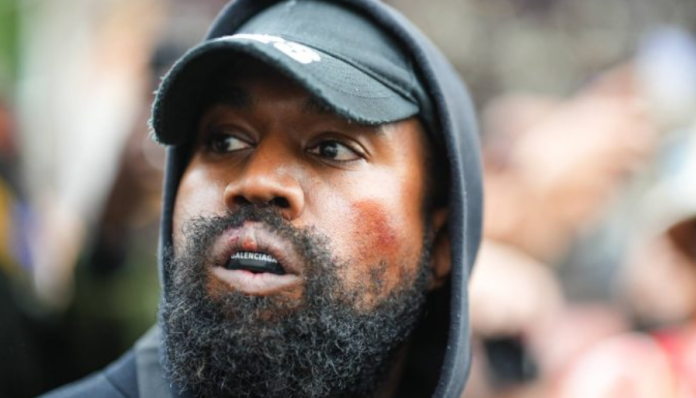 Ian Connor, a stylist and associate of West, who was accused of sexual assault, posted a video showing the fall.

A video posted by Ian Connor, West’s stylist and colleague, shows the giveaway taking place (as reported by Rolling Stone), with a voice in the background saying, “Courtesy of Kanye West.” Connor has previously been accused of sexual harassment by at least half a dozen women.

West faced controversy after he donned a shirt emblazoned with this slogan when he unveiled his latest Yeezy line after his catwalk debut at the Balenciaga show as part of Paris Fashion Week.

He also doubled down on his views, writing in his Instagram stories that the Black Lives Matter movement “was a scam,” adding, “It’s over now… welcome.”

He then responded with a new Instagram post that included a photo of the long-sleeved T-shirt in question: “This is my last answer when people ask me why I made a T-shirt that says white lives matter… THEY HAVE.”

As Rolling Stone notes, this phrase — borrowing the slogan Black Lives Matter — has been adopted by white supremacist organizations in recent years and is classified by the Anti-Defamation League as a hate slogan.

According to Rolling Stone, a source close to the drops said there are plans for a second round of giveaways. This happened after Dov Charney, the manager of Los Angeles Apparel, refused to release shirts produced by his company because of West’s anti-Semitic posts.

Connor, meanwhile, has collaborated with West in the past, calling himself on Twitter the “creative director” of a recent T-shirt featuring Muhammad Ali fighting Superman, with West as Ali and Supreme creative director Tremaine Emory as Superman.

In a screenshot posted by Connor, West wrote “Love, love this” in response to the T-shirt, and a few days later, the host of the Drink Champs N.O.R.E. podcast was seen wearing it.

Connor has not been publicly associated with West since 2016, before that he worked as a consultant for the Yeezy brand. But in June 2016, rapper Theophil London claimed that West had fired Connor, which coincided with several women coming forward accusing Connor of sexual assault, as well as Amber Rose’s comments in The Daily Beast that several women had contacted her. personally about Connor.

Connor denied the allegations, stating Broadly: “I do not approve of rape and have never raped anyone. Why force someone to do something they don’t want to do? Any forced situation is not cool.”

During his appearance on the Drink Champs podcast, West lashed out at Pete Davidson, claiming that his ex-wife Kim Kardashian’s ex-boyfriend was a heroin addict. The rapper’s unverified statements were made without evidence. Davidson has not yet publicly responded to the allegations.

The controversial interview of the billionaire rapper and entrepreneur with the podcast was removed from YouTube and Revolt after the co-host of N.O.R.E admitted that he “regrets” that he broadcast West’s comments.

In other news, Elon Musk recently deleted a tweet hinting at a possible business collaboration with West.

Halsey Was Stalked During a Concert