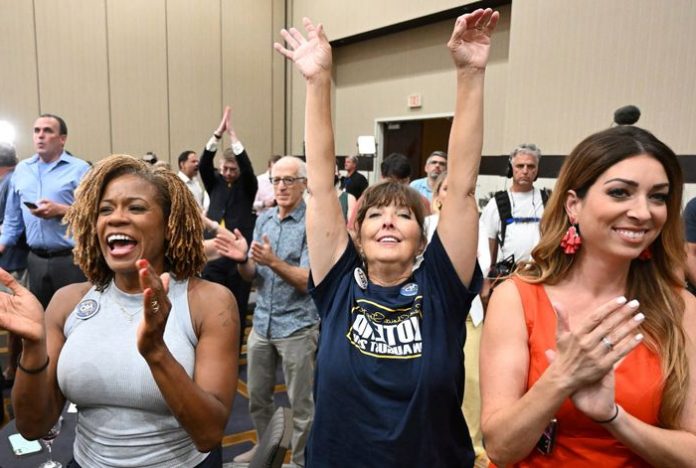 It was the first test of voter sentiment since the U.S. Supreme Court’s decision in June that overturned the constitutional right to abortion, which produced an unexpected result with potential implications for the upcoming midterm elections.

Kansas voters on Tuesday loudly declared their desire to protect abortion rights by rejecting a ballot measure in a conservative state closely linked to the anti-abortion movement that would allow the Republican-controlled Legislature to tighten restrictions or ban the procedure altogether. .

It was the first test of voter sentiment since the U.S. Supreme Court’s decision in June overturning the constitutional right to abortion, which produced an unexpected result with potential implications for the upcoming midterm elections.

Although it was only one state, the large turnout in the August primary elections, which usually favor Republicans, was a major victory for abortion rights advocates. When most of the votes were counted, they prevailed by about 20 percentage points, and the turnout was approaching typical for the autumn gubernatorial elections.

The vote also gave hope to Democrats across the country seeking to change the rules of the game during an election year otherwise filled with gloomy omens for their prospects in November.

“This vote clarifies what we know: most Americans agree that women should have access to abortion and the right to make their own health care decisions,” President Joe Biden said in a statement.

Calling on Congress to “restore Roe’s protections” in federal law, Biden added, “And the American people should continue to use their voice to protect women’s right to health care, including abortion.”

The Kansas vote also served as a warning to Republicans, who welcomed the Supreme Court’s decision and moved quickly with bans or near bans on abortion in almost half of the states.

The proposed amendment to the Kansas Constitution would add language stating that it does not give the right to abortion. A 2019 State Supreme Court decision declared that access to abortion is a “fundamental” right under the state Bill of Rights, preventing prohibition and potentially undermining legislative efforts to impose new restrictions.

The referendum was closely watched as a barometer of liberal and moderate voter anger over the Supreme Court’s decision abolishing the nationwide right to abortion. In Kansas, abortion opponents did not say what legislation they would apply if the amendment was passed, and were outraged when opponents predicted it would lead to a ban.

Mallory Carroll, a spokesperson for the Susan B. Anthony Pro-Life America, a national anti-abortion group, called the vote a “huge disappointment” for the movement and urged anti-abortion candidates to “go on the offensive.” She added that after the ruling of the US Supreme Court, “we must work exponentially to ensure and maintain the protection of unborn children and their mothers.”

The measure’s failure was also significant because of Kansas’ ties to anti-abortion activists. The “Summer of Mercy” anti-abortion protests in 1991 inspired abortion opponents to take over the Kansas Republican Party and made the Legislature more conservative. They were there because Dr. George Tiller’s clinic was one of the few in the United States known to perform abortions in late pregnancy, and he was killed in 2009 by an anti-abortion extremist.

Anti-abortion lawmakers wanted the vote to coincide with the August state preselection, claiming they wanted to make sure they would be the focus of attention, although others saw it as an obvious attempt to boost their chances of winning. Twice as many Republicans as Democrats voted in the August primaries in the state in the decade leading up to Tuesday’s election.

“This result is a temporary setback, and our selfless struggle for the value of women and children is far from over,” said Emily Massey, a spokesperson for the Amendment campaign.

Microsoft agrees with the US military: will sell AR glasses

The oldest player in the world entered the book of records