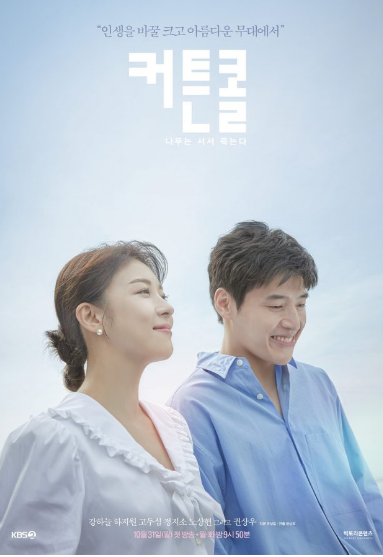 Curtain Call is a series telling the story of Ja Geum Sun (Go Doo Shim), a North Korean woman who travels to South Korea and founds the Paradise Hotel. When there’s not much time left, she ties up theater actor Yoo Jae Hong (Kang Ha Neul) to fulfill her last wish, dragging him into a web of secrets, truth and lies when he pretends to be her grandson and gets entangled with Ja. Geum Sun’s own family. Ha Ji-won will play Park Se-yeon, the general manager of the Nakwon Hotel and the youngest daughter of the family to which it belongs.

The released poster depicts Yoo Jae-hong and Park Se-yeon standing side by side under a blue sky. Yoo Jae-hong exudes her warm charm in a blue shirt, and Park Se-yeon boasts of her purity and beauty in a white blouse, completing a picturesque poster. Although they don’t look at each other, the gentle eyes and pure smiles of Yoo Jae Hong and Park Se Young fill the poster, making the hearts of the audience tremble.

The production company Victory Contents noted: “The two [characters] who met because of Ja Geum Soon have feelings for each other, but they are experiencing a big emotional gap because of the situation they are in. We tried to portray their situation the way they can. don’t fight with their affectionate looks and sweet smiles to each other, causing mixed emotions on the poster. Viewers will be able to experience various emotions and excitement, watching how the emotions of the two characters will be released.”

A Prince in New York 2: what the critics are saying