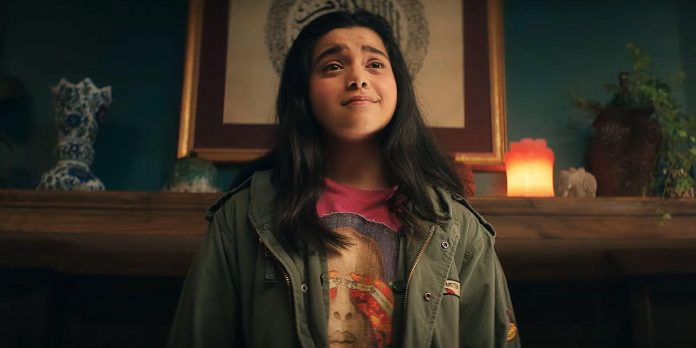 In just one day, fans will be able to watch the Miss Marvel finale, where Kamala Khan Iman Vellani is expected to finally wear her superhero costume. To create a buzz around the upcoming episode, Marvel Studios has released a new clip from the final episode of the Disney Plus series, in which Kamala reveals her big secret to the Khan family. Little does she know that it won’t be as big a discovery as she thought.

In her journey through Miss Marvel, Kamala managed to keep her identity a secret for the first few episodes. However, after the Fate clan was introduced, people close to Kamala gradually began to learn about her magical powers. While her best friend Bruno Linz has been a secret from the beginning, after Kamala’s first encounter with the villains, Nakia Bahadir finds out that she is actually a “Night Light” who disguises herself as a “budget Captain Marvel”. Kamala’s mother and grandmother found out the truth in Karachi, but the rest of the Khan family still didn’t know anything.

The new clip of “Miss Marvel” begins with Kamala trying to attract the attention of her family while they look at the gifts that her mother Muniba brought from Karachi. “I have to make an announcement,” she declares, followed by an awkward apology for not revealing the secret earlier, disrupting her brother Aamir’s wedding and “sneaking off to AvengerCon.” At her mother’s insistence, she finally comes to a big discovery: “I’m an easy girl.”

When she raises her hand to demonstrate her strength, Aamir interrupts her and asks her to explain what she means. “Night light,” she whispers, clearly unhappy with the name. It seems she is still undecided about her title of “Miss Marvel”, and perhaps this disclosure is still ahead. It turns out that her family already knows about her true identity, since Muniba was unable to keep the secret. “In fact, I only told Abbu,” she excuses herself, but, as Aamir points out, the “classic train of gossip about Khan” has left the building. “You tell Ammi,” she tells Abbu, “and we eavesdrop because his phone is always on speakerphone,” he tells Kamala, and this is a perfectly understandable scenario for many viewers.

There is only one episode left in Miss Marvel, and the series has a lot to sum up. Kamala has not yet chosen a superhero name and has not put on a costume. In the comics, Bruno helps her put together a costume. It remains to be seen whether the series will remain true to comics in this sense. The series has already hinted at Kamala’s “Miss Marvel” costume in episodes, piecing it together, with a mask given to her by Bruno, a red belt from Red Dagger, a blue vest from Waleed and a logo in the form of a zipper. inspired by her broken necklace given by her mother.

“Miss Marvel” is broadcast on Disney Plus.

Denise Richards Says She Can’t Judge Her Daughter Herself For Only...