Home Entertainment Kaide Gordon Shares News About His Fitness As The Wait For Liverpool’s... 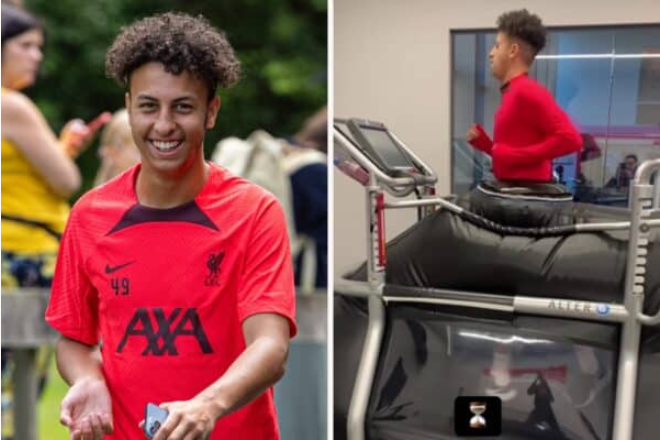 Liverpool are hoping to see Kaide Gordon back in action after the winter break, but the young winger is still not fully training after a nine-month break.

It’s a long process for Gordon, who has endured a number of injury problems since his last appearance for the under-21 team in February.

In October, the player, who signed a contract with Derby for 3.4 million pounds, turned 18 after a breakthrough campaign during which he played four times for the adult team and scored his first goal.

But currently he has problems with his pelvis, and according to the latest information from the club, he will return soon after the restart.

Injury has limited his opportunities to train and, while he remains in Jurgen Klopp’s first-team plans, Ben Doak’s appearance serves as a reminder of the fragility of the young player’s career at the highest level.

Currently, Gordon is not yet training outdoors on solid ground, and on Wednesday the teenager announced this via his Instagram story.

🏃‍♂️ Kaide Gordon is still undergoing his rehab for a long-term injury.

Running on a @Alter_G anti-gravity treadmill to eliminate risk when working on his fitness.

Slated to return after the winter break, there’s still hope he could join the first team in Dubai. pic.twitter.com/OYqKBpZLmA

In a short video, the striker can be seen on the AlterG treadmill at the AXA Training Center with anti-gravity technology designed to eliminate bumps when running.

AlterG’s official website explains that it helps to “recover faster, train, protect or recover from injury or surgery, or increase the amount of training while minimizing stress-related injuries.”

It adds: “Using a compressed air chamber to evenly reduce gravity load and body weight in one percent increments, AlterG allows patients and athletes to move without restrictions and without pain, restoring and building muscle strength, range of motion, balance, function, and fitness.

“No other unloading technology offers such precision, accuracy and comfort.”

The theory is that Gordon can maintain and improve his overall fitness, while significantly reducing his chances of a recurrence or further damage to his current injury.

It looks like Gordon has a long way to go when it comes to his return to the main squad, but there is hope that he will be able to travel to Dubai for training camp next month.

“The conditions for training and recovery in Dubai are just very, very good,” Pepein Linders said in an interview LiverpoolFC.com earlier this week.

“A change of scenery is always welcome when recovering from a long-standing injury.”