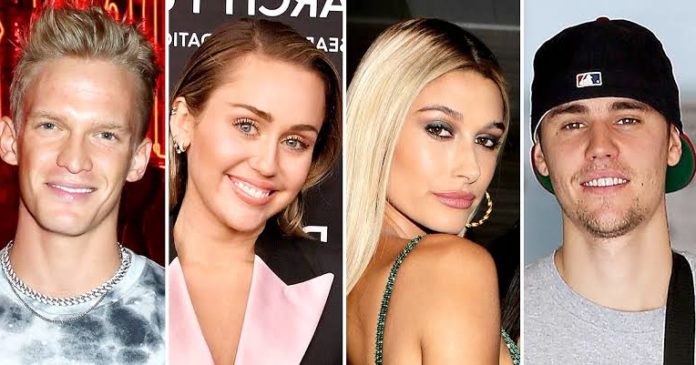 Justin Bieber has just made his second marriage and is in contact with Cody Simpson. Hailey Baldwin’s husband wants a double date with Miley Cyrus!

On September 30, Justin Bieber and Hailey Baldwin remarried. This time, they organized their wedding ceremony with all their friends and family. The couple said yes in South Carolina and they did not hesitate to spend a lot of money on their wedding. They privatized parts of a luxury hotel and they got more than 500,000 euros. It seems that the couple did not invite Miley Cyrus. Still, they are good friends.

Miley Cyrus was not at the wedding of Justin Bieber and Hailey Baldwin. But, the singer knows the two stars very well and she rubs shoulders with them. By the way, his new boyfriend, Cody Simpson is a friend of the singer. Thus, they often send messages via social networks and they comment on their photos. A few hours ago, the interpreter of Baby proposed a double date.

JUSTIN BIEBER PROPOSES A DOUBLE DATE AT CODY SIMPSON!
Recently, Cody Simpson is in a relationship with Miley Cyrus. The singer knows Justin Bieber well and they talk to each other on social networks. Several hours ago, he published a photo of him shirtless and Justin Bieber commented on the photo and gave him a compliment. “Your body is the land of wonders”. he said. Then, after some exchanges, the husband of Hailey Baldwin proposed a double date! He would like to have dinner with his wife, Miley Cyrus and his friend.

last Monday was the most special day of my life:)

So, Cody Simpson seems to like the proposal and he answered Justin Bieber. ” Send me a message “. We doubt that the two men will find a date to spend an evening together. Thus, Miley Cyrus will be able to see the singer while enjoying his new boyfriend. Then, Hailey Baldwin will surely be happy to spend time with her husband’s friends. In any case, there is a good atmosphere between the two couples.

6 years ago today I was really drunk. (oh yeah and also threw a Bangerz album release party in NYC)

Plot details and release date for the ’80s series sequel