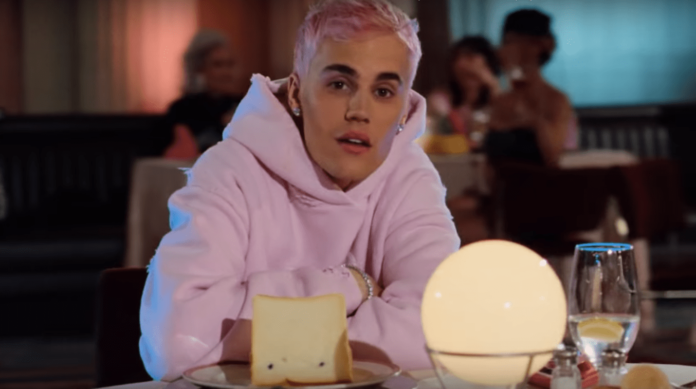 Justin Bieber started 2020 with his expected return to the music industry. A few days ago, the singer premiered his song ‘Yummy’, which became a success shortly after its release. However, the video of that song could have a very dark meaning that would even have fatal consequences for the Canadian. Continue reading to learn about the theory behind ‘Yummy’.

Justin Bieber was at the center of the controversy and began to be canceled by many people after posting a series of photos of babies on his Instagram account in order to promote his song ‘Yummy’. Many felt that mixing these photographs with the sensual message of the song was inappropriate, so social media users expressed their discomfort.

Later, everything would take an unexpected turn when some fans of the singer began to analyze the meaning of the song and the hidden messages of the video, so it was concluded that perhaps Justin Bieber was trying to tell the story of his suffering and what’s behind the music industry and big corporations.

HIDDEN MESSAGES IN ‘YUMMY’
The ‘Yummy’ video shows Justin Bieber in a kind of fancy restaurant, where he is surrounded by people who seem to have a lot of money. While the singer and those present at the place consume their food, a group of children whose faces convey dismay, enliven their stay with music.

In the end, Justin is left alone and a close up appears on a plate with a cake, which later disappears and instead shows a photo of Bieber as a child. Yes, surely at this point you already speculate what this is all about, and yes, it is what you think.

As part of his promotions, Justin shared several photos on Instagram where he is part of a delicacy and others where several babies appear. Some images were also created showing the title of the song where the lyrics are in the form of pizza and ice cream.

All these signs have made many think of one thing: the crimes against children that are supposedly committed in the music industry and about which several artists have previously referred.

MENTAL CONTROL
Over the years there have been several theories that state that Justin Bieber is part of the celebrities who have undergone the MK Ultra due to the transition he has had over the years and where we have seen a remarkable change in his appearance, attitude and mental stability. There is a part of the song where you can hear “I have lost control of myself,” which could be an indication of the things that have been forced to be over time. In several parts of the video, you can also observe the singer with the lost look.

JUSTIN TRIED TO TELL HIS OWN HISTORY?
Throughout the singer’s musical career there have been several clues that indicate that he was the victim of abuse and harassment by important people within the music industry, such as L.A. Raid, a Sony executive who made inappropriate comments about Justin when he was just a child.

‘Yummy’ has become one of the many times in which the singer has made reference to the dark networks of Hollywood, where his main victims are children. In previous interviews, the singer has tried to expose this situation, however, his most recent music video would be the greatest proof of what Bieber wants to communicate and alert the world.

OTHER UNFORGETTABLE CASES
The death of DJ Avicci was flooded with rumors and conspiracy theories since it is believed that he did not attempt against his life as the official statement said, but that it was all about a plan to eliminate him after he tried to expose the dark side of Hollywood . Katy Perry has also been accused of talking about this issue in her songs as ‘Bon Appetit’, resulting in her being a victim of collapses in full concerts and emotional instability, as well as a decline in her musical career from which she has already begun get ahead.

DOES JUSTIN BIEBER RUN DANGER OF DEATH?
Many fans have expressed concern about Justin Bieber since, if this theory were true, the singer’s life could be in danger. Another fact that has activated the alerts of fans is the age of Hailey Baldwin’s husband, since it is believed that he could become part of the legendary Club of 27.

What do you think about the conspiracy theory of ‘Yummy’? Leave your comment.

BTS returns to Las Vegas with new concerts and will be...