Home Celebrity Justin Bieber and his wife Hailey Baldwin gathered on the PDA at... 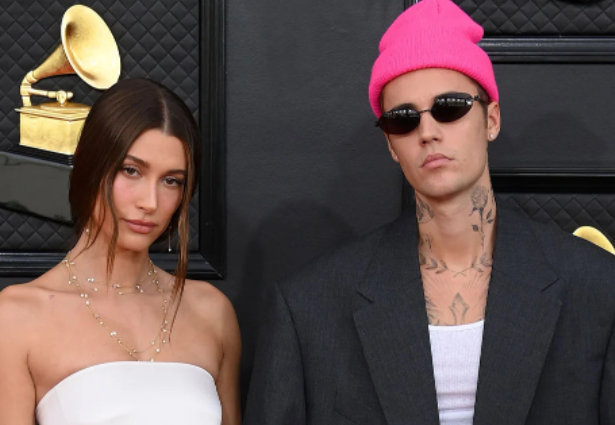 Getting better. Hailey Bieber (nee Baldwin) attended the 2022 Grammy Awards ceremony with her husband Justin Bieber less than a month after being hospitalized due to a blood clot in the brain.

The 28-year-old Yummy singer and the 25-year-old model arrived at the ceremony on Sunday, April 3, at the MGM Grand Garden Arena in Las Vegas, holding hands, and kept close while walking the red carpet. . The pair used a laid-back approach to their Grammy ensembles: Justin was wearing a big jacket and a pink hat. Hailey, meanwhile, wore a simple strapless Saint Laurent dress paired with a loose braid.

On March 12, the Arizona native reported that two days earlier she had received medical attention after she had “stroke-like symptoms” that affected her movements. “They found that I had a very small blood clot in my brain, which caused a slight lack of oxygen, but my body went away on its own and I completely recovered within a few hours,” Hayley shared in her Instagram story at the time. .

Although Stephen Baldwin’s daughter described the incident as “one of the scariest moments I’ve ever experienced,” she was able to recover quickly and return home. “I am so grateful and grateful to all the wonderful doctors and nurses who took care of me!” Haley continued the upload. “Thank you to everyone who addressed us with kind wishes and care, as well as for all the support and love.”

Justin, nominated for eight Grammy Awards at the 2022 ceremony, including Album of the Year and Record of the Year for Peaches, spoke about the “really scary” situation during a concert in Denver on March 16. crazy how life randomly throws you crooked balls. You can’t really control much,” he told the crowd between songs. “Most of you probably know or have seen the news about my wife… but she’s fine, she’s good, she’s strong.”

He continued: “It was scary, you know, it was really scary. But I know for sure that God has her in his hands, and that’s good.”

Just three days after fearing for her health, Hayley was spotted at Justin’s concert in Salt Lake City. Sharing a video from the show on March 13 in her Instagram story, the former Drop the Mic host sang along to her husband’s hit “Love Yourself” while dancing in the audience with friend Tyrell Hampton.

The couple dated from time to time before officially getting back together in June 2018. A month later, the pop star announced that he and Haley were engaged, and Us confirmed that they had secretly tied the knot in September 2018. The couple celebrated their first wedding anniversary with a star-studded wedding in South Carolina.

Justin made his wife laugh when they posed for photographers outside the MGM Grand Arena.

The Biebers looked madly in love as they stopped for a quick kiss in the middle of the carpet.

During a walk on the red carpet, the couple adopted several dramatic poses.

The look of love

Despite all the photographers and the audience, the Grammy winner looked only at Haley.

The Biebers have coordinated their outfits for a date at the Grammys.