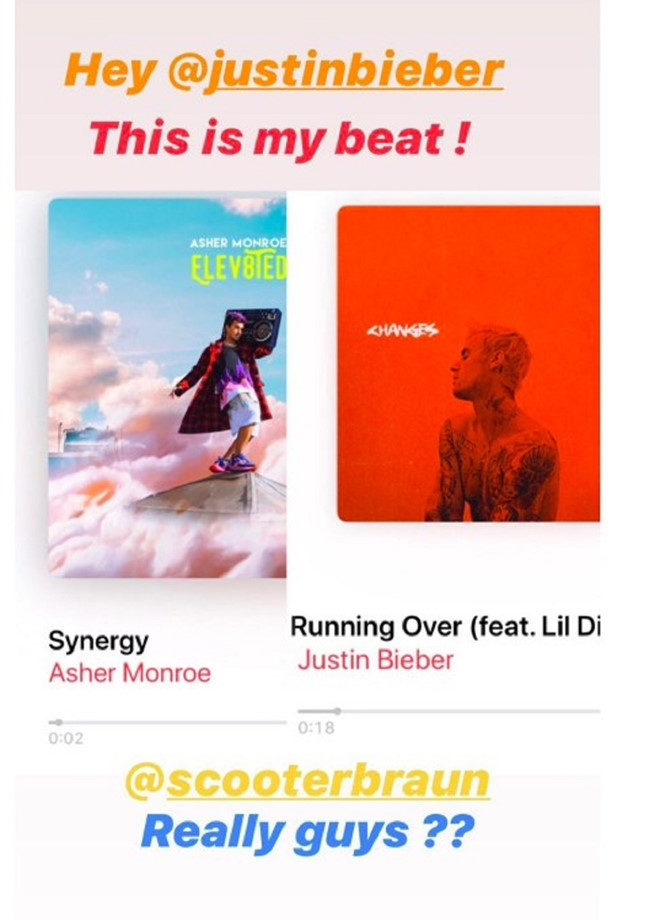 Justin Bieber has been accused of “stealing” the beat of Synergy by American singer Asher Monroe into the song Running Over in the Changes album released on Valentine’s Day.

After 5 years from the Purpose album (2015), finally on February 14, Justin Bieber officially returned to the music race with a project called Changes. This is the fifth studio album of Justin Bieber’s career with 17 tracks. Among them, 16 songs are brand new products and a remix of Yummy – the song was just released a single in January.

The melody of the two songs is the same.

Released less than 24 hours, the Changes album was entangled in the plagiarism grove, causing a stir in the public opinion. Justin Bieber joins rapper Lil Dicky in the song Running Over. According to The Whisp, the song accused of “borrowing” the beat, Synergy, was released by singer Asher Monroe in May 2019.

In response to the sudden accusation by Asher Monroe, some netizens listened to the two songs and confirmed their tunes were quite similar. Writing on Twitter, Asher Monroe fans accused the vocalist Yummy of “ripping off” singer Asher Monroe on her new album. However many Twitter accounts still believe Justin Bieber does not steal the tone. They told Justin Bieber that it was a free song on Laxcity and anyone could use it.

This is not the first time Justin Bieber got caught up in the plagiarism scandal. In 2016, Justin Bieber was accused of stealing the Ring the Bell melody performed by White Hinterland to bring on the hit song Sorry. Earlier, the song “ Somebody to Love ” by Justin Bieber and Usher almost faced a penalty of up to $ 10 million (approximately 232 billion) when R&B artist Devin “De Rico” Copeland and musician Mareio Overton. elements of copyright infringement.

Caitlin Carter compares the body after giving birth in a bikini...

Taylor Swift Asks For Help To Regain Control Of Her Music