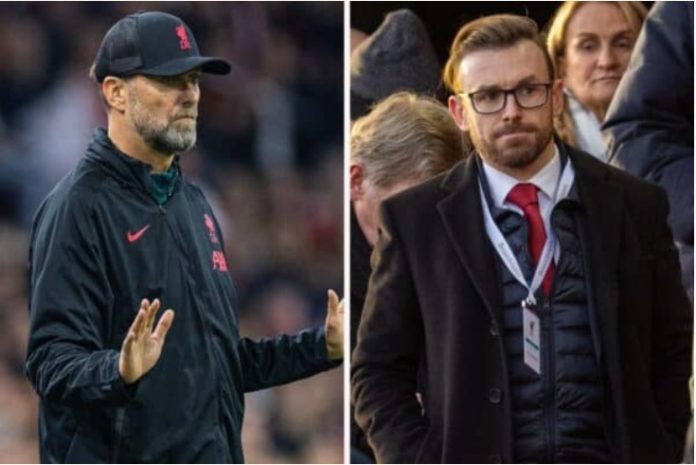 The impact of Julian Ward’s decision to leave his Liverpool position remains to be seen, but Jurgen Klopp was among those who wanted him to stay.

Thursday brought the shocking news that Ward has submitted his resignation to the owners of Fenway Sports Group and will leave the club in May.

This was followed by reports that influential research director Ian Graham, a key player in Liverpool’s data-driven hiring model, had also announced his intention to leave.

Just a few months after Michael Edwards stepped down as sporting director, and amid FSG’s attempts to sell the club, this leaves the Reds confused.

A search is currently underway for Ward’s successor, and journalists report that those in Liverpool were “surprised and disappointed” by the development.

According to GOAL’s Neil Jones, Klopp was “among those who tried to convince Ward to stay,” such was his belief in the current situation.

“It will now be interesting to see how Liverpool move forward,” Jones adds, “and in particular whether the coach will take on even more responsibility in terms of the club’s recruitment and retention strategy.”

Paul Joyce of The Times has already called Klopp “more practical” when it comes to hiring Liverpool in recent windows.

But his desire to keep Ward in place calls into question how the club will operate in the future, especially when it comes to at least the next two transfer windows.

Ward, who previously worked for the Portuguese Football Federation, was considered a key player in concluding deals with Luis Diaz from Porto and Darwin Nunez from Benfica.

It was assumed that the Reds would continue to enter this market using Ward’s contacts, and Benfica midfielder Enzo Fernandez was touted as a possible target.

Whether this will remain the case is unclear, but despite claims of Klopp’s growing influence, when it comes to signings, it is undoubtedly more convenient for the coach to work together with the sports director.

This has always been the case, and Klopp explained it after Edwards was appointed Liverpool’s first sporting director in 2016.

“It’s no secret that I like the concept of a sports director,” he told the club’s official website.

“And having worked on this model before, I found that it is nothing but positive and forward-looking.”

Until a replacement for Ward is found, it is likely that CEO Billy Hogan will negotiate signings and sales, working with Klopp, head of recruitment Dave Fallows and chief Scout Barry Hunter.