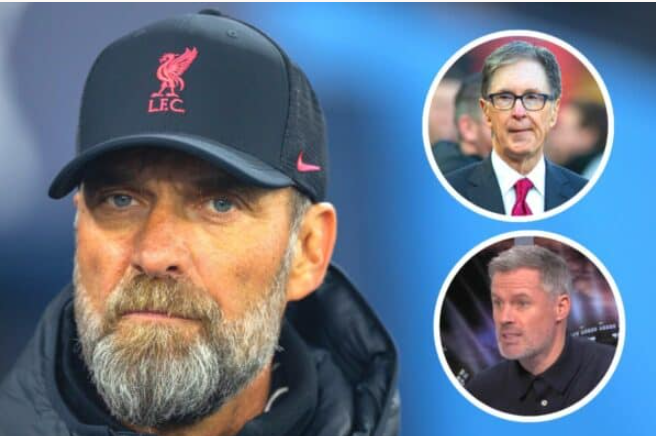 Liverpool returned to competitive action after a 3-2 defeat to Manchester City on Thursday, with doubts still hanging over the ownership of the club.

FSG decided last month to put Liverpool up for sale, but it has since been stressed that they are as open to a “strategic partner” as they are to a full sale.

Speaking before Thursday’s match at the Etihad, Carragher said he believed FSG’s decision to seek investment was probably prompted by Klopp’s demand.

“I wonder if it’s a sale or if they need an investment,” Carragher said on Sky Sports.

“I think there is no doubt that Jurgen Klopp told the Liverpool owners, ‘I need 250 million pounds to spend it in the summer,’ and that sounds like an outrageous figure, but that’s what Manchester United and Chelsea spent last summer.

“These are the numbers that Liverpool’s teams are spending, and I think only once during Jurgen Klopp’s tenure did Liverpool really go for it in the transfer market, right after the Champions League final (in 2018). I bought a lot of players, and I think it’s necessary now.

“You’re talking about this kind of investment, and I don’t think FSG has these funds right now, so they’re looking for investments to come in and help them.”

Liverpool are still linked with big-money deals for players such as Jude Bellingham and Enzo Fernandez, but there are questions as to whether the club can really afford both under the current ownership regime.

Carragher went on to say that despite both Liverpool and Manchester United being up for sale, the ownership situation at his former club is different from the situation at Old Trafford, as FSG has done a “fantastic job” since they took over in 2010.

“The owners are criticized for not investing more money, but when they came to the club, they never called themselves Abramovich or what we have at Man City,” he continued.

“It was the right management of the club, and Liverpool spent the money they brought to the club.

“That’s what they did, they did a fantastic job, they bought Jurgen Klopp, Liverpool won the championship, three Champions League finals, now they have a completely renovated stadium, a new training base.

“They’ve done a fantastic job, FSG, but will they be able to compete with other teams financially? No. And that’s why they need someone to come and invest.”

Why Fans of 1,000-Pound Sisters Notice That Tammy Never Eats on...