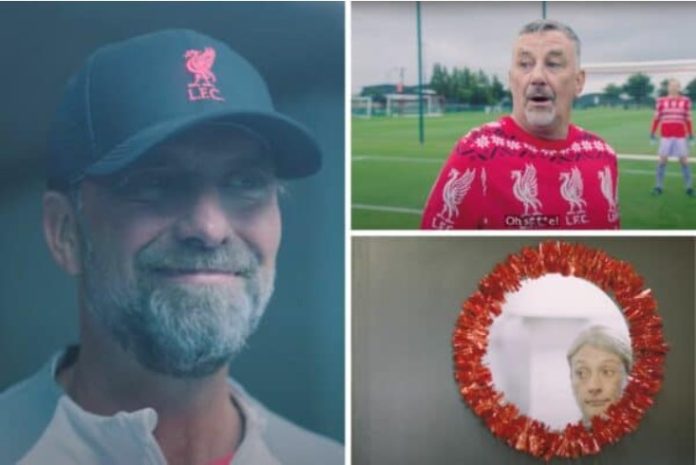 LFC Retail has launched its Christmas campaign with a brilliant holiday ad featuring the likes of Jurgen Klopp, Jan Rush and John Aldridge, not to mention kitchen workers Carol and Caroline!

The advertisement is based on the calm preparation for Christmas at Liverpool, when the World Cup starts at the end of this month, and there will be no first-team matches for about six weeks.

Based at the AXA Training Center, it begins with a demonstration of the kitchen staff and the head of the nutrition department, Mona Nemmer, in an empty dining room.

The advert then cuts to Klopp, who has crossed another day off his calendar from his office before Aldridge, Rush and former Liverpool goalkeeper Chris Kirkland show no good on empty training pitches.

Klopp is then disturbed by the noise coming from outside, while the trio of LFC legends enjoy playing on the grass.

Aldridge and Rush are shown scoring several goals past Kirkland before their fun is interrupted by a shout of “Get off the field!”

Aldo’s “Oh space!” response is arguably the highlight of the video, before it returns to Klopp grinning, watching the proceedings from his office.

The advertisement was especially liked by Liverpool fans, and Aldridge himself shared it on social networks:

The video is the first part of a series of three LFC Retail commercials, and the remaining two will be shown on November 21 and December 16.

The coaching staff, players, legends and fans will also take part in them, and they will continue the theme of missing LFC in action.

The club’s Christmas assortment includes hundreds of exclusive gifts for men, women, children and babies. As well as Nike’s performance range for gear, training and lifestyle.

Cristiano Ronaldo: The Athletic leads the charge in damning interview with...