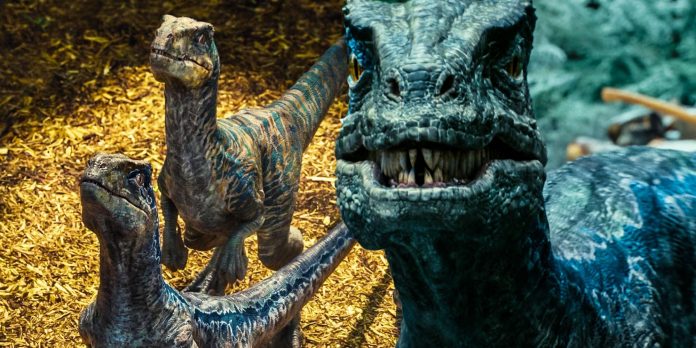 Velociraptors were the main dinosaur villains in Jurassic Park. While Tyrannosaurus Rex was a giant and formidable super predator, velociraptors were much more versatile and deadly killers. Velociraptors about the size of a man and extremely intelligent pack hunters were a threat, they killed and killed for fun, and not just because they were hungry. The original Jurassic Park ranger Robert Muldoon (Bob Peck) warned John Hammond (Richard Attenborough) that all raptors should be destroyed, and he was right. The Velociraptors returned to The Lost World: Jurassic Park and Jurassic World III, killing several more characters. However, Jurassic World decided to make Blue and her siblings more “heroic”; after they briefly turned to Owen and adopted Indominus Rex as their new Alpha, Blue and her pack helped defeat the massive hybrid dinosaur. In Jurassic World: Fallen Kingdom, Owen returned to Isla Nublar to rescue Blue, whose DNA was needed to create the Indoraptor that turned Blue into the most important velociraptor in the entire franchise.

In Jurassic World Dominion, Blue and Beta are living in the wilderness of the Sierra Nevada Mountains when Beta is kidnapped by mercenaries hired by Dr. Henry Wu (BD Wong) and BioSyn CEO Dr. Lewis Dodgson (Campbell Scott). Owen “promised” Blue that he would return Beta, which was ridiculous and ridiculed by Dr. Ian Malcolm (Jeff Goldblum). Of course, Grady is true to his word, and he reunited Beta with Blue at the end of the Jurassic World Dominion. However, the final Jurassic film breaks the logic, because it’s hard to accept that the excited Blue, who saw how people stole her baby, did not kill anyone she encountered while Owen was in Malta and Italy in pursuit of Beta. Even before Beta was captured by a predator, Blue must have hunted animals and humans for four years after she was released after Jurassic World: Fallen Kingdom, especially since Owen wasn’t constantly around to tell her no.

It was always hard to swallow that Owen was able to train Blue and her siblings in the Jurassic World, and that man and velociraptor have a mutual understanding. Changing the role of velociraptors in Jurassic World as the villains of the franchise and turning Blue into a “hero” might seem like a good idea, but it never really worked. There is nothing pleasant or friendly about Blue or any velociraptors, and they do not arouse sympathy. To his credit, Owen doesn’t lose sight of the fact that Blue can kill him at any moment, and others like Macy Lockwood (Isabella Sermon) rightly treat Blue with fear, but this only undermines how stupid it is to try to turn predators into dinosaurs, as viewers are supposed to have always been.

The end of Jurassic World Dominion, where Owen and Blue have a “moment” and predator is “grateful” to Grady after he returns Beta to her, is also illogical. Blue may never kill Owen, this particular person, but she’s definitely raising Beta to kill. And the more Velociraptors Blue multiplies, the greater the threat to every other person or animal living in their radius becomes. Jurassic World Dominion ends with a hopeful note that dinosaurs can coexist on Earth, but this simply does not apply to velociraptors, and Blue has never been and cannot be a “heroic” dinosaur that can coexist with humans. . Jurassic Park has always been right about velociraptors.