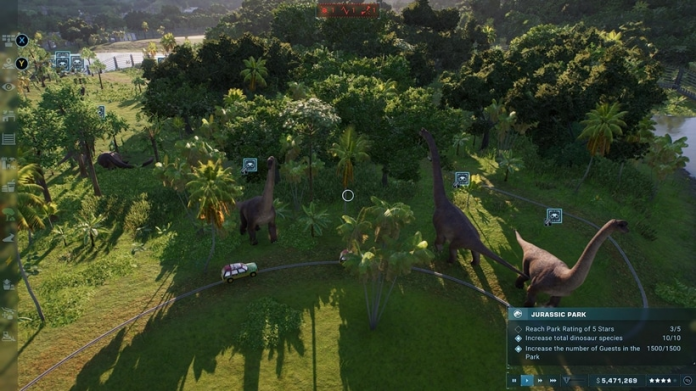 Jurassic World Evolution 2: Those in their 40s experienced an intense period of great movies in cinema. One of those films was Jurassic Park, which hit the market in 1993. Over the years, sequels were made that were not as successful as the original title, but they helped to increase the legion of fans.

In video games, there have been several attempts to link the context created in movie theaters. Most of them drank from the action genre, with ingredients of drama and horror, but none of the productions gained notoriety.

One of the latest attempts to make Jurassic Park enjoyable in games was made by Frontier Development in 2015. The company tried to diversify with a park simulator called Jurassic World Evolution, which didn’t gain much media attention but pleased most movie fans. Now, in 2021, the company has launched the continuation of this franchise.

We have a game!

Labeling Jurassic World Evolution from 2015 was a problem. At times he looked like a park manager; in others, an action game with building ingredients. Until today we questioned, as it was clear that the game had great potential to be explored. In Jurassic World Evolution 2, we see more clearly the intention of the producers to make the adventure much more of an action game with pertinent and fun management. However, it could be better.

In the second edition, new game modes are present, such as the possibility to create the park freely. There is also a simple campaign mode, which helps you understand the gameplay. Furthermore, it is possible to play the challenge mode, in which you have to fulfill certain requirements.

There is also the mode called Chaos Theory, which makes the player relive the adventures of cinema, such as those that took place in Sorna and Nubar islands. There are many possibilities for fun for fans of the series, and we are sure that players will have a very high replay factor to enjoy everything the title offers.

One of the big goals in Jurassic World Evolution 2 is to build the biggest dinosaur park in the world. It is necessary to set up spaces for the animals, using the tricks learned in the previous game, optimizing the space, putting up fences, in addition to monitoring the dinosaurs to find out what they like best.

Otherwise, the player must prepare to see the anger and rebellion of these spectacular beings. Some of them are from different biomes and require a lot of money to make the climate and place as harmonious as possible.