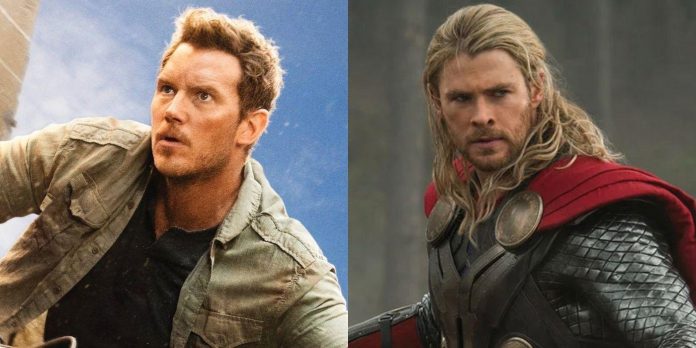 Whether it’s action-movie-based characters like Owen Grady and Thor, or more stylish characters like Ian Malcolm and Tony Stark, both Jurassic World and the MCU series have similar characters on screen. These main characters complement each other in all franchises, and it’s worth taking a closer look to note the ambiguous conclusion of the dinosaur film series.

Both Claire and Gamora started out rather rudely, sacrificing personal relationships for the sake of promoting their positions. But thanks to their wild adventures and the corresponding connection with the Star Lord and Owen, Claire and Gamora allowed themselves to come out of their shell and let others inside.

Gamora became more caring towards Baby Groot and her younger sister Nebula, and Claire became Maisie’s foster mother and began to take care of her nephews. These two characters bravely take risks: Gamora takes on global threats, and Claire forces a tyrannosaurus to chase her to save her loved ones.

Fans were curious to find out where this returning character from Jurassic World was last seen when it turned out that Alan had become lonely after many years devoted to his work. Similarly, Steve focused his life on his responsibilities to the Avengers because he felt like a man out of time.

Both men found the courage to pursue the women they loved at the end of their arches when Steve returned to Peggy and Alan confessed his love for Ellie. Alan and Steve are not the most trusting people, but they value their connections and do their best when they can help someone in need.

Kayla and Nebula may like to think that they don’t need people around them, but secretly they crave friendship. They are straightforward, detached, but very brave and ready to trust someone else only when they see that this person is doing something bold himself.

Kayla decided to help Claire and Owen when she saw that they were willing to die to save Macy, while Nebula began to respect the Guardians when they made it clear that they would give their lives for each other. Two characters are also ready to take part in the action, although their instinct is to save themselves before anyone else.

Ian’s warning about dinosaurs in the previous film was an important plot point to remember in Jurassic World Dominion, as it turned out that he was right to fear that they would reach the mainland. Similarly, Tony Stark tried to get the Avengers and the world to heed his warning about the imminent threat of Thanos.

Moreover, the two are eccentric, brilliant, but rather vain in character, embodying the “rock star” attitude that John Hammond used to describe Jan. Tony took the bold step of completing the Snap to save his friends, while Ian was brave enough to fight the Giganotosaurus on his own for the same purpose.

Henry Wu was closer to Arnim Zola as a character before Jurassic World Dominion gave him a redemptive arc. Wu was responsible for genetic catastrophes such as Indominus Rex and locusts, but claimed that he dealt with them only for scientific purposes.

Hank Pym was never wrong, but he was also very confident. He was willing to let the Ghost die in order to save his wife from the Quantum Realm, claiming that the former’s problems were not his own. He is a brilliant scientist who created Pym particles, but is also known for his self-confidence.

Macy should be among the bravest children in the Jurassic Park series, as she faced dinosaurs alone without fear. America also showed courage in confronting the Scarlet Witch, who was chasing America to kill her and declare her powers.

Macy and America are young people who had a difficult life and were outcasts; Macy’s status as a clone child led to her exile, and America’s multiverse jumps meant she had no family or friends. But both still found sensitive personalities in themselves, who eventually found love from parental figures.

Darcy and Franklin are characters who are well aware of the danger they are in and are reluctant to join the adventure. Franklin often pointed out tragic deaths in Jurassic Park films, becoming a comic character who, nevertheless, was loyal to his friends.

Darcy was also the one who often pointed out the obvious, which the heroes did not mention, for example, that people are absurdly fighting with powerful Asgardians. Like Franklin, Darcy also primarily helps to relieve tension, as each of them openly declares his displeasure to get into dangerous situations.

Ellie and Peggy are leading professionals in areas where women have to work hard to make themselves known.

New Life is Strange gets image with the next protagonist