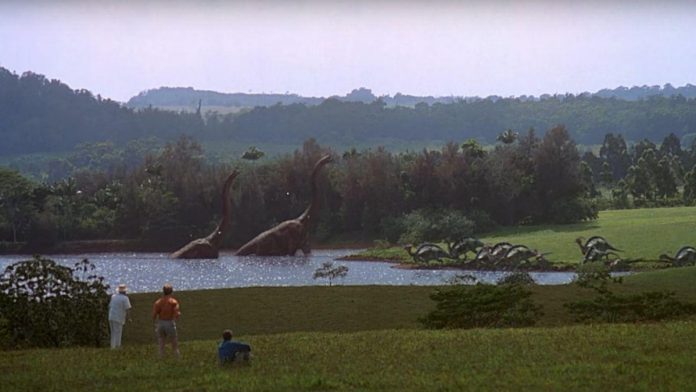 1993’s Jurassic Park didn’t just launch a popular franchise that recently marked the end of an era with Jurassic World Dominion. It was also a groundbreaking movie for visual effects, with computer generated imagery being combined with animatronics, stop motion and other practical effects to bring these dinosaurs to life. As we approach the 30th anniversary of Jurassic Park, Dennis Muren, the visual effects supervisor, explained to CinemaBlend why this high-ranking entry in the list of best Steven Spielberg movies was the “perfect movie” to revolutionize visual effects for the general public.

Dennis Muren is among the many people who are interview in the Lawrence Kasdan-helmed six-part docuseries Light & Magic, which explores the history of Industrial Light & Magic (ILM) and the impact the Lucasfilm division has had on entertainment. Tied into the docuseries becoming available to stream with for Disney+ subscribers, I chatted with Muren, as well as Phil Tippett, who created the go motion for Jurassic Park’s dinosaurs as the production’s “Dinosaur Supervisor.” When I asked Muren how it felt to be at the nexus of Jurassic Park being such a massive turning point for the film industry with regard to the relationship between visual effects and special/practical effects, he noted that while he sees 1991’s Terminator 2: Judgment Day (which he also worked on) as being a bigger deal, he understands why Jurassic Park specifically caught on with a lot of people. In his words:

That’s everybody else’s view. My view was the break was… there was a whole period when that was going on that the breakthrough film was really Terminator 2 for me because it put everything in place. But the subject matter wasn’t something that got a lot of people and it didn’t show up as much about as an effect as a dinosaur does. So I was as surprised as anyone, or more people probably, than seeing the best looking photographic, moving dinosaurs you’d ever seen were gonna knock people out that much. A lot of the credit has gotta go to ILM and us being able to pull off, and Phil and everybody worked on it, but a lot of it to Steven who made a perfect movie for that. When they get out of the Jeep at the beginning of Jurassic [Park] and they walk up and, and he goes, ‘Look at that, it’s a dinosaur’ or something like that, that’s exactly the audience’s feeling. And I’ve had more people comment on that one shot as knocking them out than probably any shot I’ve ever worked on. And Steven brought the audience with them in that whole introduction to it because they’ve been talking about it for like 15 minutes, right? And here it is, and it delivers. It’s amazing, and I never see that stuff going on as it’s happening because there’s too much.

There’s no question that Terminator 2 was a groundbreaking movie for CGI, particularly through the Robert Patrick-played T-1000 and its liquid metal shapeshifting abilities Though interestingly enough, one of the T2 sound effects associated with that character only cost 75 cents). But as far as Jurassic Park goes, Dennis Muren was surprised to see just how much the movie’s dinosaurs impressed audiences, which stemmed from a combination of not just what he and his coworkers at ILM pulled off, but also director Steven Spielberg’s vision and providing the proper kind of emotion to go along with the technological dazzlement. The moment where Alan Grant, Ellie Sattler and Ian Malcolm see dinosaurs for the first time on John Hammond’s island is certainly one of Jurassic Park’s most memorable scenes, to the point that people are still bringing it up to Muren.

After Dennis Muren finished speaking, Phil Tippett echoed his sentiments about Jurassic Park and also recalled when he got to see an early cut of that specific scene with Steven Spielberg and others, saying:

It was really awe inspiring, and after we shot all the background plates, we went down to Amblin to have Steven talk us through the cut, and he had the music from the Saint Crispin’s Day, was it Henry the Fifth or something like that, wasn’t that far off emotionally from what John Williams ended up with. When we were done looking at that first scene with the brachiosaur, I told Steven, ‘You crazy bastard, you’ve done it.’ And then everybody in the room was like, ‘He called Steve a bastard!’ And Steven goes, ‘No, it’s a line from the movie.’

In that moment, Phil Tippett channeled Ian Malcolm to express his admiration for what had been accomplished, and I imagine a few moviegoers might have said those same words (which was actually “the crazy son of a bitch”) when they saw Jurassic Park for the first time. Michael Crichton’s original novel was popular, to be sure, but the Jurassic Park movie was a worldwide phenomenon, making $914 million worldwide during its initial theatrical release and later crossing $1 billion during its 2013 rerelease. For those interested in learning more about the blockbuster was made, there are plenty of Jurassic Park behind-the-scenes facts to look over. If you’d rather just watch the movie itself, it can be streamed with an HBO Max subscription.

You can also hear Dennis Muren and Phil Tippett talk more about their careers and ties to ILM by watching Light & Magic on Disney+ (opens in new tab). As far as the entire Jurassic franchise goes, keep your eyes peeled on CinemaBlend for what the future may hold.

Payday 3 will arrive in 2023 to consoles and PC