Home Entertainment Jurassic Park Summary: What to Remember Before the Jurassic World Dominion 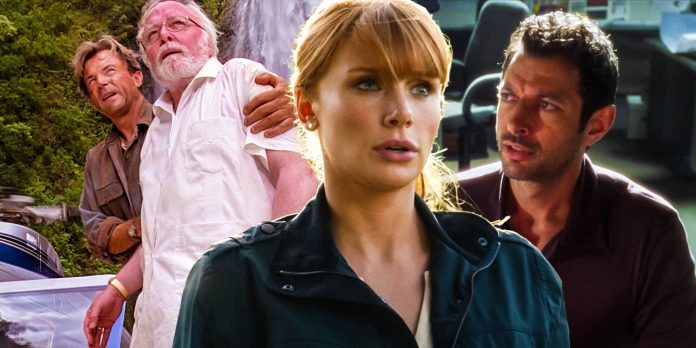 Before Jurassic World: Dominion concludes the blockbuster dinosaur saga, here are the highlights to remember from the Jurassic Park and Jurassic World movies. Jurassic Park was created by the late writer Michael Crichton, whose 1990 bestseller about genetically modified dinosaurs inhabiting a theme park was adapted by Steven Spielberg for a Hollywood blockbuster. The monumental success of Jurassic Park has spawned five sequels, a canonical animated series on Netflix, Jurassic World: Cretaceous Camp, several video game adaptations, theme park rides and an infinite number of merchandise.

Spielberg’s original Jurassic Park changed a lot about Crichton’s original novel, and since the 1997 sequel The Lost World: Jurassic Park, all films have been set in the continuity of Spielberg’s films, not Crichton’s. In fact, Spielberg’s The Lost World bears little resemblance to the sequel novel of the same name written by Crichton before his death. Along with iconic dinosaurs, especially Tyrannosaurus Rex and velociraptors, which featured in every movie, Jurassic Park introduced four major characters who subsequently influenced the entire Jurassic saga: John Hammond (Richard Attenborough), the late CEO of InGen. and the creator of Jurassic Park, paleontologist Dr. Alan Grant (Sam Neal), paleobotanist Dr. Ellie Sattler (Laura Dern) and mathematician Dr. Ian Malcolm (Jeff Goldblum). Although all three teamed up only once in Jurassic Park (before Jurassic World: Dominion reunited the trio), Malcolm and Grant alternated as the main characters of The Lost World and Jurassic Park III in 2001, and Sattler played a cameo role in the latter film.

In 2015, Colin Trevorrow gently relaunched Jurassic Park, which led to a billion-dollar box office that revived the dormant franchise. Trevorrow’s film, renamed Jurassic World, introduced new characters in the person of Owen Grady (Chris Pratt) and Claire Deering (Bryce Dallas Howard). Jurassic World not only demonstrated the success of the theme park (before it was inevitably destroyed by dinosaurs), but Trevorrow also raised the level of dinosaurs by creating hybrid prehistoric creatures, starting with Indominus Rex, who became the supervillain dinosaurs in the film. . In addition, the concept of using dinosaurs for military purposes has become part of the Jurassic franchise. Jurassic World: Fallen Kingdom 2018 has finally moved the dinosaurs from their isolated islands to the real world, literally changing the fate of the planet in Jurassic World: Dominion.

The movie that started it all, “Jurassic Park” is still considered by fans to be the best movie of the franchise. Jurassic Park presents for the first time the main concepts running through the entire saga: InGen technology for cloning dinosaurs from prehistoric DNA extracted from flies stuck in amber, Isla Nublar Island 90 miles from Costa Rica, the main characters John Hammond, Alan Grant, Ian Malcolm, and Ellie Sattler, and also the main sample of people fighting for their lives with dinosaurs and often eaten. Two other important characters featured in Jurassic Park are Hammond’s grandchildren, Lex (Ariana Richards) and Tim Murphy (Joseph Mazzello), who return as adults to Jurassic World: Dominion. The iconic music of John Williams is another important reason why “Jurassic Park” remains a favorite of generations of viewers.

“Jurassic Park” is also a parable about how the power of genetic engineering, if used with restraint and arrogance, inevitably leads to disaster. However, precisely because this lesson was not taken into account, it was possible to remove the sequels of the “Jurassic Period”. While on Isla Nublar, Jurassic Park established a pattern of dinosaurs isolated in their own closed world, where people had to go to be chased by prehistoric creatures. This image persisted until “Jurassic Park: The Fallen Kingdom”, when the island of Nublar was destroyed by a volcanic eruption, and dinosaurs were brought to the mainland of the United States. In addition, Jurassic Park established that the original dinosaurs bred by InGen were females, but thanks to amphibian DNA mixed with their genomes, dinosaurs could reproduce. Thus, “life has found a way out,” which is another of the main themes of the Jurassic saga.