Home Celebrity Jungkook and Jin had a fun boxing session 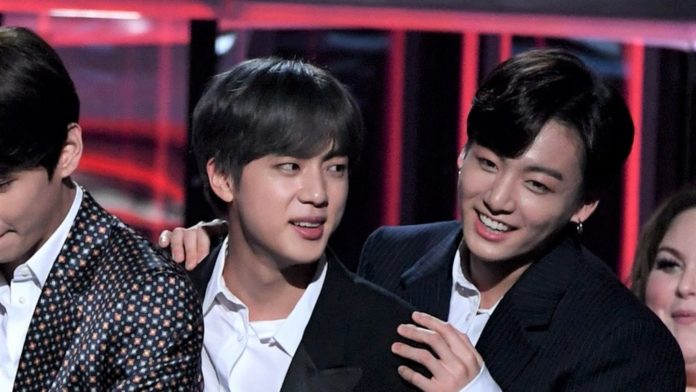 Jungkook and Jin had a fun boxing session. Idols always find fun while preparing for a shoot.

During a clip recently shared by BANGTANTV, BTS fans were able to see two of the group members share a fun moment as they prepared and hoped that everything was ready to start working.

The idols caught on camera during this time were none other than Jungkook and Jin , who, wearing black suits, used a plastic hammer to play and pretend to fight.

The item was one of the props the idols would later occupy, Jungkook was holding it and gave a light blow to the arm to Jin , who immediately went on the defensive and positioned himself to throw a few blows to this instrument , just as if it were a boxing pear.

Jungkook shifted position to make this a more entertaining challenge for his partner, who continued this dynamic until he began to feel pain in his knuckles from the impact. Given this, Jungkook found for himself that it was painful to hit the plastic and later they changed the papers , Jin held the hammer waiting for JK to hit him, just as he had done before, but Jungkook had other plans, so he walked out in another direction, leaving Jin with his intentions to fight.

Check out the clip of these idols below: