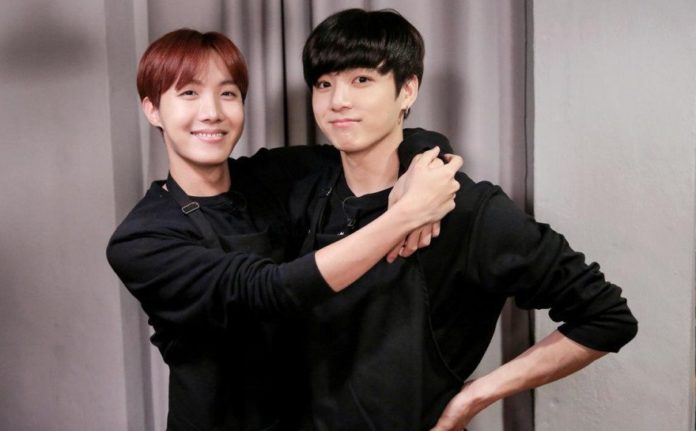 Jungkook and J-Hope celebrate ‘ON’ win with fun photo. You will not stop laughing at the particular way in which these members celebrate.

The boys of BTS appeared in the program M COUNTDOWN in episode number 655 and took another win home, with the song ‘ ON ‘.

To celebrate, through the social network they occupy the most, Twitter, they uploaded a photo with the emblematic figure of the winner, J-Hope and Jungkook did not waste time climbing a jungle with him, proud of his achievement.

In the photo J-Hope throws a kiss and Jungkook makes the gesture of the heart with one of his hands, later the boys uploaded another post with a detail that only the most observant could see in the image we know that ARMY is an expert in that.

The reflection of J- Hope is appreciated in the iconic silver trophy, but the funny thing is that the rapper’s face will be curved, which makes him look funny .

The members of the group have a great sense of humor and whenever they can show it with jokes , this unique way of celebrating has made their fans fill the comments section with messages of support, but also highlighting that they can laugh at themselves. .

Watch the full video of his performance:

BIGBANG’s Taeyang to Release White Night, His Own Documentary