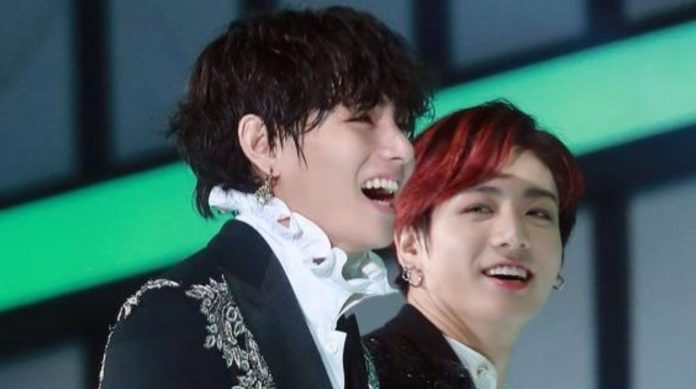 Undoubtedly, one of the most beautiful friendships we have witnessed is one that Jungkook and Taehyung have. On different occasions they have shown how much they love and excite their fans whenever there is any interaction between them. The most recent of them resulted in something great: Kookie singing karaoke. OMG! We tell you how it all happened.

Through the Weverse community, Taehyung began interacting with fans because he couldn’t sleep. However, Jin asked V to fall asleep and not activate the application’s notifications. LOL! It was not long for Jungkook to join V and continue interacting with ARMY.

However, what filled the fans with excitement was a small Taekook moment that quickly became a trend in social networks. Kookie and V gave ARMY a great moment by starting to say things using aegyo, which is why several thought they were perhaps flirting. OMG! One of those conversations between the idols reached the next level when Jungkook began talking about the possibility of doing a karaoke session just then, which Tae soon responded positively and encouraged.

After asking what song he should sing, Jungkook chose a song called ‘Perhaps That Was Love’, which his father likes very much and is special for him. Aww! Kookie soon recorded a video in the dark and upload it to the BTS account on Twitter, where her beautiful voice has stolen the hearts of fans instantly.

Although it is still early in South Korea, Taehyung and Jungkook decided to have some fun and share a beautiful moment with their fans. Although the karaoke session was very short, this was something unique. Several were left wanting to hear V singing too and many more have dreamed of the possibility that after this a subunit formed by the idols will be born. <3

There is no doubt that V and Jungkook’s friendship is unique. Did you like this moment TaeKook?

Aaron Carter Was Found Dead In His Home At The Age...