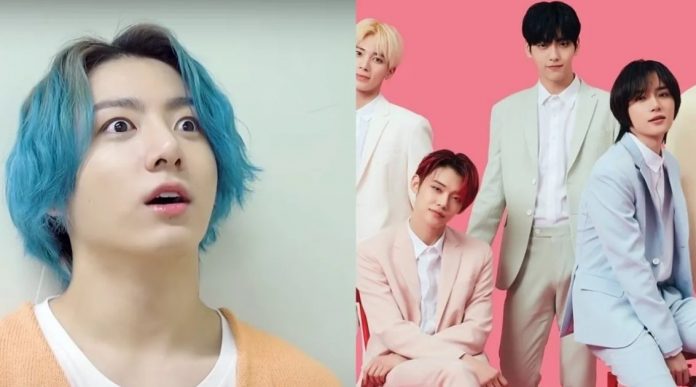 BigHit Entertainment is a very successful agency, not only for finding a good formula to create amazing K-Pop bands but mainly for all the talent and dedication that their band idols put into their work; BTS belongs to this great agency and is a worldwide success.

After having enough achievements with Bangtan Sonyeondan, BigHit also debuted to TXT, and again they are reaching the top because, despite the fact that Tomorrow X Together is a young band, they have already managed to surpass other groups that have been around for a longer time in several ways. in the industry.

So BTS and TXT are closely related, but now that ARMY has found Jungkook’s twin in TXT we can think that a royal blood tie ties both K-Pop bands together.

ARMY is always aware of Bangtan and many times also of TXT, so some of the BTS fans found a photograph of Beomgyu where they noticed the great resemblance of the young idol with Jeon Jungkook of the Bangtan Boys; The fan shared his comparison on Twitter surprising the fandom.

And they even dressed the same! His haircut, of course, it looks like twins, but they can’t be because Beomgyu is smaller; other fans found the resemblance of JK but with Taehyun.

Or this one too …😲Taehyun & JK….😳 pic.twitter.com/RiwNzOcJxh

The styles are similar, but who is more like?

We hope MOA and ARMY continue to support and admire their favorite K-Pop bands, who will surely continue to rack up hits and bring the best of their music to the world <3.

In other TXT news, MOA made Soobin cry with the cute words he shared from his heart, how did Soobin feel listening to his fan?

Why do Pokemon teams have six slots for the list