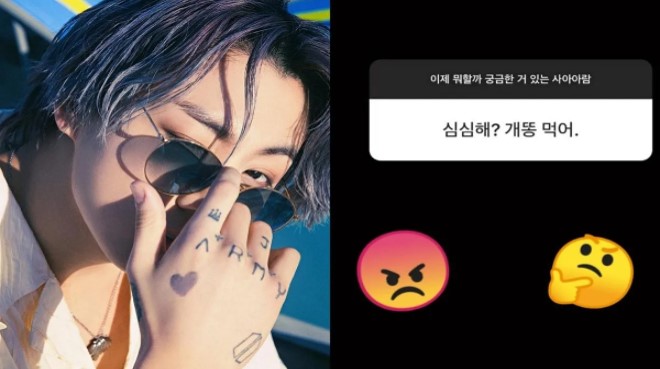 For the Bangtan Sonyeondan members, the fame they have gained has also attracted a lot of trolls and haters. Here’s how Jungkook experienced it recently, responding to his fans’ Instagram posts. The BTS participant demonstrated how to react calmly to haters.

BTS’s Jungkook recently had to deal with haters. The artist was responding to comments from his fans on Instagram when an unpleasant message caught his attention. I don’t hesitate a bit to respond to this message of hate.

Both BTS and ARMY were constantly confronted with hate messages from anti, trolls or haters. Sometimes it’s hard for fans to react without the anger of the moment. Although BTS members sometimes choose to ignore uncomfortable comments, sometimes they teach how to react calmly and gracefully.

JUNGKOOK GOT A HATEFUL MESSAGE IN HIS IG STORIES

BTS’s Jungkook is currently undergoing mandatory quarantine after testing positive for Covid-19. The young man took advantage of the quarantine to live with his fans through social media, so in Instagram stories he asked to recommend movies to cope with the break.

Thousands of ARMYs have sent their recommendations, as well as support comments and questions about the idol. However, among these questions, a hate comment leaked out, to which Jungkook did not hesitate to respond.

An Instagram user decided to send a malicious comment. In response to Jungkook ‘s request for recommendations , Hayter wrote: “Are you bored? Eat dog poop. The BTS member’s response surprised his fans: through a sound with a completely black screen, he said, “Aren’t your words too harsh? Hehe hehe, if you make a lump with chocolate cake (Korean sweets), it will have a similar shape.”

HOW DID THE ARMY RESPOND TO JEONGKOOK’S HATRED?

ARMY couldn’t hide their annoyance after seeing the message that Jungkook received from BTS. Soon they took to social media to talk about how rude this comment was, as well as that it was not true. Some even wanted Hayter to apologize for the idol, as he is recovering.

It was recently announced that J-Hope from BTS is free from COVID and went to Las Vegas to meet BTS at the Grammy Awards ceremony.

Agust D and Max premiere the acoustic version of Burn It,...