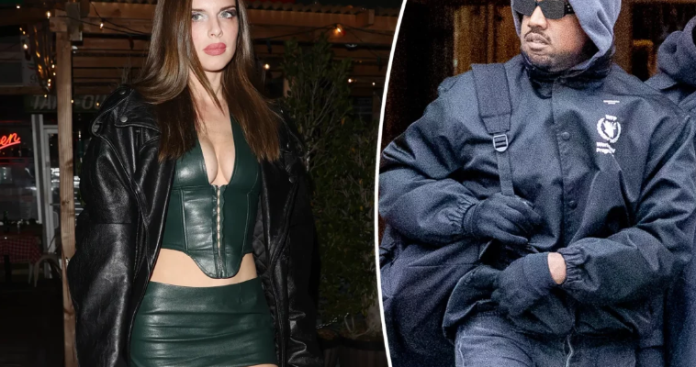 Julia Fox did Kim Kardashian a favor. At least that’s what she’s hinting at in the latest update. She may or may not have been recognized for her role in the movie “Uncut Jewels,” but she made headlines because she dated Kanye West. After all, Ye is known not only for arguments, but also for dating beautiful models.

After their relationship, Julia Fox remained in the spotlight thanks to her fashionable outfits and makeup, which she proudly claimed to have done herself. She also claimed that Kardashian used to shop at her clothing store. Fox seems to be a big fan of the Kardashian family, especially the SKIMS owner, as she now claims she met with West to protect Kim Kardashian.

Kanye West and Julia Fox’s dating phase may have come to an end, but the model hasn’t finished talking about it yet. In the TikTok video, Fox was seen casually lying on the bed as she once again talked about her dating phase with Kanye West. She claimed that E would bombard her with texts, and then say that she had bad etiquette in correspondence. As the rapper was yelling at her, she thought, “Maybe I can distract him and just please him.” Adding that “maybe I can distract him from Kim’s case.”

The Italian-born actress was sure that if anyone could distract West, it was her. She also stuck to her opinion that he behaved normally when they were together. According to Fox, she and the Gold Digger singer didn’t talk about his past relationship when they were together. Rather, their topics were deeper, such as clothes, ideas, plans for children’s education, etc. Obviously, she switched off the moment he started tweeting offensive things.

The couple first hit the news when they were spotted having a romantic dinner at Carbone Restaurant in Miami. After that, they were noticed several times, but in the end they ended the dating stage on good terms. She assured him that, despite his opinion, she respected the artist. Meanwhile, Ye is still in a relationship with his ex-wife Kim Kardashian.

Deadpool 3 Already Has a Premiere Window in Marvel Studios: Script...