JPMorgan stated in the report shared on November 6 that investors may have turned to buying Bitcoin (BTC). In the report, it was announced that Bitcoin was purchased at overbought levels in the last week.

JPMorgan Chase & Co., In the report it shared, included the overbought signals created by investors that strengthened the Bitcoin rally with short-term buying / selling. The report, which stated that Bitcoin, which saw an increase of more than 10 percent this week, was thought to be bought at an overbought level, suggested that this situation could trigger potential gains or vice versa.

Emphasizing the PayPal news and the rise of Grayscale Bitcoin Trust, JPMorgan also mentioned the latest situation in CME Bitcoin futures in his report. Stating that the transactions on CME reached the point of overbought, the company made statements using open positions on futures.

The CME Futures chart shared in the report shows the Bitcoin proxy based on open positions (proxy: a variable that theoretically simulates market behavior) found in CME Bitcoin futures. As the Bitcoin price approaches $ 16,000, it is stated that the position in futures transactions gives a signal of overbought. 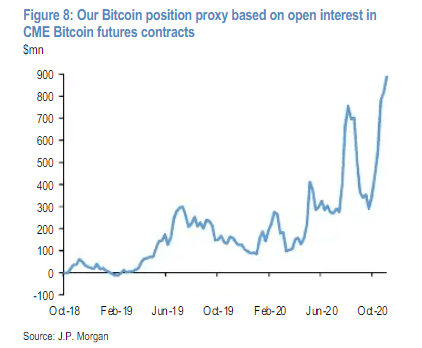 Using moving averages (MA), JPMorgan stated that he compared the transactions made by investors who make short-term instant buy / sell transactions with those made with Bitcoin. At the same time, the report, which examines the short and long-term signals in the Bitcoin price, stated that there have been sharp increases since the beginning of the week, and a sudden increase was recorded in short-term investments on November 2. In these rises, which are indicated by Z-score, it is shared that Bitcoin reached 1.2 Z-score from 0.7 on November 2, which means overbought. 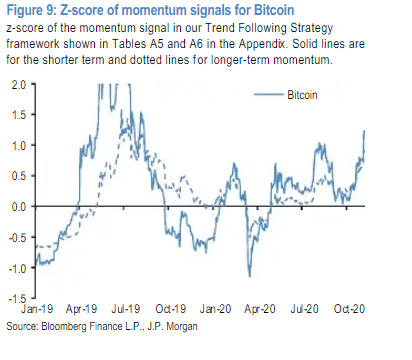 The report states that the Bitcoin rally may have been strengthened by traders who do not want to miss the rally and want to buy / sell in a short time. The sharp price increase seen during the week shows that Bitcoin was subject to a lot of buying / selling, according to JPMorgan. This is interpreted as a factor that can reverse the trend direction or increase potential gains.

Bitcoin could be an alternative to gold in the long run

Referring to the role of Grayscale Bitcoin Trust in the Bitcoin price rise seen in October, the report stated that gold investors may have switched to Bitcoin as a result of the difference between Bitcoin and gold ETFs. According to the company, the long-term uptrend for Bitcoin could increase significantly with the increasing competition of the Bitcoin market with gold.

The price of the coronavirus vaccine has been announced

Donald Trump stops US funding for WHO

Hedge Funds Grow Perfectly! What does it mean for Bitcoin (BTC)?