Home World Josep Borrell: The Taliban Won The War; We Need To Talk To... 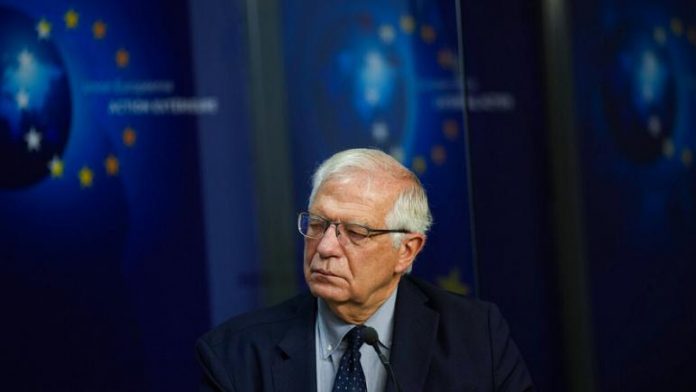 “The Taliban won the war and we need to talk to them,” said Josep Borrell, the European Union’s (EU) High Representative for Foreign Affairs and Security Policy. said.

Borrell made a statement to the press after the extraordinary video conference meeting of the EU Foreign Ministers.

Stating that they will continue to support the Afghan people, Borrell was asked whether this would mean recognizing the Taliban, “This is not an official recognition, it means dealing with it.” gave the answer.

“Taliban won the war and we need to talk to them”, Borrell said, stressing that they will use all their maneuvering power to ensure that the Taliban comply with human rights and UN Security Council resolutions.

Borrell, any cooperation of the EU with the Taliban; underlined that he would depend on “a peaceful and inclusive solution, respecting the fundamental rights of all Afghans, including women, youth and minorities”.

Evacuation of Afghans working with the EU

Pointing out that their priority is the evacuation of EU citizens and Afghans who have worked with the EU for more than 20 years, Borrell said: “If they want to leave the country, we cannot ignore them. We will do everything to bring them and provide protection in EU member states. Spain, who is ready to take these people,” said. I want to thank you either.” he said.

Borrell noted that the said people, whose number is about 400, will then be distributed to EU countries that issue visas.

Noting that another of their priorities is to prevent the new security situation in Afghanistan from causing large-scale migration to Europe, Borrell stated that they will meet with member and transit countries on this issue.

Borrell stated, “It must be admitted that there are lessons to be learned and that there have been false predictions about the ability of the Afghan army to resist the Taliban attacks.”

Emphasis on a political solution

In a written statement from Borrell’s office, “The EU calls for an immediate cessation of all violence across Afghanistan, ensuring security and civil order, and protecting the lives, dignity, and property of civilians.” expression was used.

In the statement, to the conflict; It was noted that a solution should be achieved through meaningful negotiations based on democracy, rule of law, and constitutional governance.