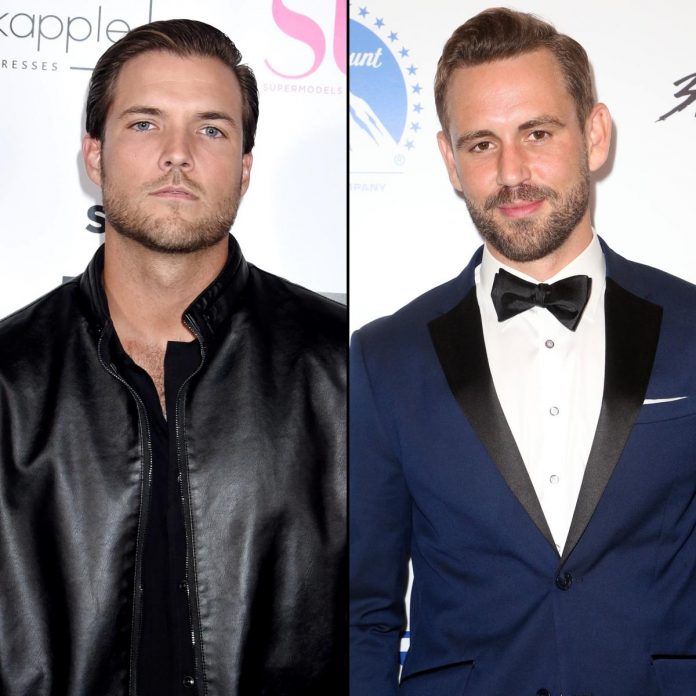 A feud is brewing in Bachelor Nation. Jordan Kimball has publicly criticized Nick Viall, who is known for often giving out relationship advice.

“And one more thing: I wouldn’t constantly listen to the advice of Mr. Nick Viall, [who] will never walk down the aisle,” Kimball, 30, said in an already deleted Instagram Story video that was re—posted by the TikTok Bachelor Dishes the Dirt fan account on Saturday, August 13. “The dude will never go down the aisle. Stop listening to his dating advice.”

He continued: “Peter Pan has never had a better example of who to follow.”

While the fifth-season “Bachelor in Paradise” alum no longer addressed his comments, his social media rants apparently referred to the former bachelor, 41, and his willingness to hand out dating advice. Viall often offers social media followers the opportunity to ask for dating advice through his “Viall Files” podcast and Instagram account. The Wisconsin native allowed fans to send dating questions via podcast email to be answered live or via a Q&A on stories every Sunday.

Viall also announced that he is currently writing a book of tips, which is due to be released in October.

“To my question to Nick and “Ask Nick”, this book is for you. I really never thought I would literally write a book,” the founder of Natural Habits wrote via Instagram in March, confirming that his non—fiction book is called “Don’t Text Your Ex Happy Birthday.” “I really doubted myself doing this, but after 2 years it turned into something I’m really proud of. For anyone who has ever felt a little helpless, frustrated, and confused about dating, relationships, and heartbreak, I promise there will be a few things in this book that will make you feel a little better about your personal life.”

Kimball’s Saturday comments also claimed that Viall, the runner-up in two seasons of “The Bachelorette,” can’t successfully dispense advice because he’s never been married. (Kimball, for his part, married Christina Creedon in January.)

Although Viall has not responded to Kimball’s statements, he has been happily dating Natalie Joy since the end of 2020.

“I am very grateful for the relationship I have with Natalie,” the host of the “Viall Files” podcast told Us Weekly earlier this month. “[I’m] very excited [about] the direction in which this is happening and the pace at which it’s happening. … We often talk, you know, about our future together and our relationship, and I’m not trying to [rush]. I don’t think any of us [are] trying to get ahead of ourselves, but we’re definitely grateful for the direction it’s heading in.”

After the Celebrity Beef contestant was asked if he was “itching” to walk down the aisle, he shyly joked: “Stay with us.”

Viall became famous as the finalist of the season of “Bachelorette” Andy Dorfman in 2014. The 35-year-old Georgia native eventually chose Josh Murray over a former software salesman before Viall returned the following year to strike up an affair with Caitlin Bristow. After the 37-year-old former Dancing with the Stars champion turned him down in favor of Sean Booth, he headed to BiP. Having failed to meet The One on the beach, he became a bachelor in August 2016. During his season, Viall proposed to Vanessa Grimaldi, but they eventually broke up a few months after the finale aired.

The Disney+ series “Treasure of the Nation” is related to movies,...