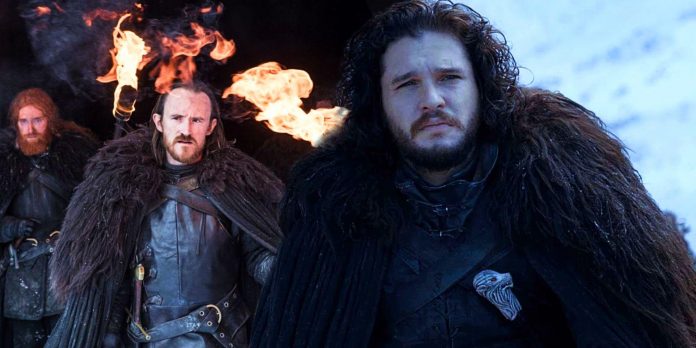 The Jon Snow spin-off provides an opportunity to explain several plot holes in the Game of Thrones finale, including a serious discrepancy with The Night Watch. The untitled sequel about Jon Snow is the latest of several spin-offs being developed by HBO, including such prequels as “Sea Serpent”, “Ten Thousand Ships”, “Golden Empire” and “Knight of the Seven Kingdoms”. Nevertheless, the Jon Snow show is the first series of Game of Thrones sequels, and the debut spin—off of the franchise was the prequel “House of the Dragon”, which was released in August 2022.

While very few details have been announced about the HBO series’ sequel, it has been confirmed that Kit Harington will reprise his role as Jon Snow if the spin-off moves forward. The show will tell about the journey of Jon Snow after the controversial finale of “Game of Thrones” 2019, in which a prominent character was exiled to the Night Watch after the murder of Queen Daenerys Targaryen. In the last frame of the original “Game of Thrones” series, Jon Snow goes behind the Wall with Tormund and a lot of wildlings, and a green plant symbolizes the arrival of spring.

Link: Yes, Jon Snow’s spin-off is dumb, but not because Season 8 of GOT Sucked

The sequel series will be an important test of whether Game of Thrones can be redeemed in the eyes of the general public, but it can also provide answers to burning questions and riddles left by the polarizing finale. One of these mysteries was the story of the Night Watch, as the fate of the group remained largely meaningless after the events of the final season of Game of Thrones. Tyrion Lannister reported that the Night Watch would remain active as the Order of the Seven Kingdoms, but in fact the people had no purpose after the destruction of the Night King and the White Walkers. The protection of the Wall was intended to keep the free people and the White Walkers at bay, but since the former may not have been interested in returning to the South, and the latter were destroyed, the true purpose of the Night Watch had already been achieved.

Tyrion explains that the Night’s Watch still exists as an order for “bastards and broken people”, but the ending of “Game of Thrones” has not answered what people will do in Castle Black. If there are no White Walkers or Wildlings to fight, there is no reason to train or defend the Wall. There will be no glory, which bastards like Jon Snow strive for, and no unifying goal for criminals exiled to the Wall. It is unclear what will prevent the people of the Night Watch from leaving their posts when there are only a few people left in the Black Castle, especially since Jon Snow seems to have left the Night Watch to live among the remaining free people behind the Wall.

It’s possible that a new threat may arise behind the Wall and threaten Westeros in the Jon Snow spin-off, but Bran will probably be able to sense such a phenomenon as the Three-Eyed Raven. Without motivation to prevent the enemies from breaking through the Wall, the Night Watch has largely turned into a labor prison. Perhaps the Night Watch will get a new target throughout the kingdom in the sequel, but if King Bran Stark does not foresee a new threat beyond the Wall, the initial need for order Game of Thrones is outdated. However, a by-product of Jon Snow may finally explain the meaning of the existence of the Night’s Watch, in addition to a haven for lost souls. Whether it’s a new King behind the Wall, a conflict with the Children of the Forest, or a new supernatural enemy similar to the White Walkers, the sequel to Game of Thrones will need a new threat to truly justify the continued existence of the Night Watch. .