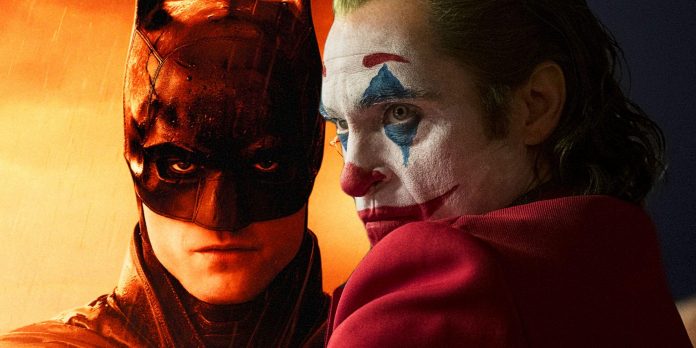 DC has a long history of failing in portraying Arkham Asylum on film and TV, but now Joker 2 and The Batman’s universe could finally fix it. As the DCEU continues to try to find its path and work out its canon after Justice League, DC is also moving ahead with two other continuities: the Joker films and The Batman’s universe. The story created by Todd Phillips is now officially continuing with Joker 2, while the world crafted by Matt Reeves is continuing with the return of Robert Pattinson for a sequel as well as the production of a couple of spinoffs for HBO Max.

Ten years after the end of Nolan’s Dark Knight trilogy with The Dark Knight Rises, DC now has a couple of versions of iconic characters like Batman and the Joker existing at the same time. There will also be at least two versions of Harley Quinn, not to mention the Arrowverse, Titans, and the upcoming Gotham Knights show. That plurality of universes and continuities, while it could cause confusion in the audiences, at least offers more opportunities for famous DC stories and characters to have their moment in live-action.

Related: The Riddler’s Mask Line Sets Up The Most Brutal Joker For The Batman 2

For example, Joker 2 and The Batman’s universe have the chance to finally explore Arkham in a way that no other DC movie or show has done before. From the Burton films to the Nolan ones, Arkham Asylum was either completely absent or an afterthought. Not even the DCEU, which was supposed to be more comic accurate and had the advantage of Ben Affleck’s Batman being more than 20 years into his journey, featured Arkham Asylum in a prominent role. Now, DC has the chance to explore more of Arkham in Joker 2, as the movie will feature a new Harley Quinn, possibly before her transformation and thus still as an Arkham psychiatrist. Likewise, The Batman already played with the idea of Arkham being where new problems for Batman are born, such as Joker teaming up with the Riddler. The Batman will also receive an Arkham Asylum spinoff show for HBO Max, which is being described as a haunted house type of story.

Arkham Asylum is as important to the modern Batman mythos as Gotham City and Batcave. However, in most of its live-action appearances, the Arkham Asylum has been treated more like a location than as a character of its own. Arkham was completely absent from the Tim Burton Batman movies, and it went on to appear briefly in Joel Schumacher’s Batman Forever and Batman & Robin. The importance given to Arkham Asylum in Batman Begins seemed to indicate that the issue would finally be resolved, but the following two movies of the Dark Knight trilogy, The Dark Knight and The Dark Knight Rises, never returned to the Narrows. In fact, during Bane’s takeover of Gotham, only the prisoners of Blackgate were freed. Between so many Batman recasts and reboots, with each director giving its own spin on the Dark Knight, it is disappointing that Arkham Asylum was never a significant part of any Batman movie universe.

Following the end of Nolan’s Dark Knight trilogy, Batman v Superman: Dawn of Justice introduced a less realistic, more comic bookish version of the caped crusader. Not only was Ben Affleck’s Batman placed in a world where magic and aliens existed, but he also had more than 20 years of history as a vigilante in Gotham. For that reason, almost every member of Batman’s rogues gallery could be written into the DCEU, which set up the perfect version of Arkham Asylum in the franchise. Suicide Squad seemed like it would embrace those possibilities, as it would feature several Batman villains like Harley Quinn, the Joker, Deadshot, and Killer Crock.

However, Arkham ended up not being that important in the movie, and the so-marketed transformation of Harleen Quinzel into Harley Quinn happened through a quick montage flashback. Justice League revealed that Lex Luthor had broken out of Arkham, but the escape scene itself was never shown. A solo Ben Affleck Batman movie never happened, and with The Flash possibly changing things to accommodate Michael Keaton’s Batman in the DCEU, the franchise has wasted what it could have been the best cinematic version of Arkham Asylum.

Oblivious to all the DCEU problems, The Batman meant a fresh start for Batman and its mythology. Despite featuring a younger Bruce Wayne, The Batman has already set up several of the Batman’s rogues, namely the Riddler, Penguin, Catwoman, and even the Joker. Not only that, but The Batman has already shown how important Arkham can be to the Dark Knight mythos. It was in Arkham that Batman interrogated the Riddler, and it was also there that Joker and Batman’s deleted scene conversation took place. The Batman’s ending also teased the idea of villains like Joker and Riddler teaming up and coming up with plans inside Arkham, which happens very often in Batman comics.

The deleted scene between Batman and the Joker also suggested that the villain will break out of Arkham, another famous comic book tradition that has yet to be featured in the movies. Audiences may have a chance to see more of that universe’s Arkham before The Batman 2, as an Arkham Asylum spinoff show for HBO Max is in the works. Not much is known about the show, and it is still unclear if it will focus on original characters or feature well-known villains.

While Joker (2019) did feature Arkham, in this version known as Arkham State Hospital, the focus was much more on Arthur’s tragic story – with the mental health facility serving more as a location than a concept. However, Joker 2 will feature Harley Quinn, suggesting that Arkham will have a bigger role in the sequel. Harley Quinn’s origins are tied to Arkham Asylum, as the villain was originally Joker’s designated psychiatrist. If Joker 2 shows the origins of Harley Quinn, even if it is in a reimagined way, it’s hard not to imagine Arthur going back to Arkham in the film. The Joker’s influence on his psychiatrist, and perhaps even on other patients, would justify the Folie à Deux title, making the concept of Arkham crucial to the sequel. Between Joker 2 and The Batman’s newly born universe, DC has the perfect opportunity to finally fix its Arkham problem.