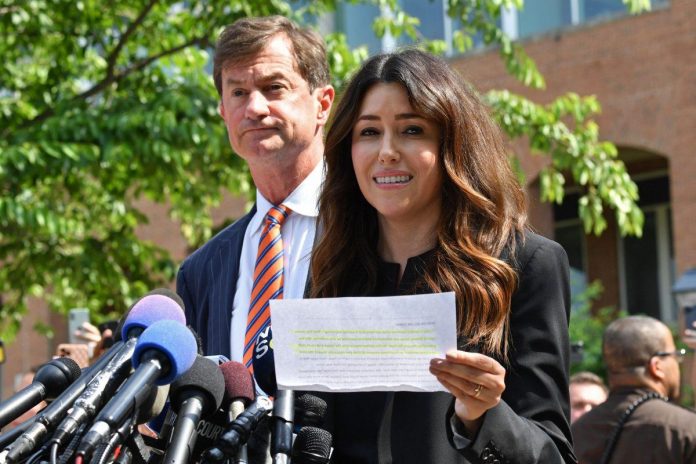 For almost two months, the world watched Johnny Depp and Amber Heard fight in court in a defamation case.

One person who has become a viral sensation thanks to the court is Depp’s lawyer Camilla Vasquez. After Depp won the case, Vasquez received a huge promotion at her law firm.

The career of Camilla Vasquez

According to the El Nuevo Herald, Vasquez was born in 1984 in San Francisco, California. Her parents are from Colombia and Cuba.

Vasquez studied at the University of Southern California and graduated with honors in 2006. She then studied law at Southwestern Law School and graduated in 2010.

Vasquez currently works for the nationwide law firm Brown Rudnick. Its website states that her work “focuses on defamation lawsuits by the plaintiff, with additional experience in contract litigation, business-related torts, and employment-related lawsuits.”

It also adds: “Camilla is able to formulate offensive and defensive litigation strategies for private clients. She also has extensive experience dealing with the parallel issues of reputation management and crisis communications arising from these commitments.”

Camilla Vasquez became a partner of the firm after helping Johnny Depp win the case.

On June 1, it was announced that the jury found that both Depp and Heard were responsible for defamation, although it was a big victory for Depp. The jury decided that Depp should pay Heard $2 million in damages, while the jury awarded him $10 million in compensation and $5 million in penalties.

A few days after the victory, it was announced that Vasquez had been promoted from a lawyer to a partner in her law firm.

“We are delighted to welcome Camilla to the partnership,” said William Baldiga, chairman and CEO of Brown Rudnick (via Deadline). “Historically, we have postponed this announcement until the end of our fiscal year. But Camilla’s performance during Johnny Depp’s trial proved to the world that she is ready to take the next step right now. We are incredibly proud of her and look forward to what she will achieve as our new partner.”

Vasquez also publicly reacted to the promotion by saying: “I am glad that Brown Rudnick has given me full confidence by inviting me to join the partnership. I am proud of the uniquely talented team I have had the opportunity to lead, which is an example of teamwork and collaboration, and I look forward to continuing to represent Brown Rudnik’s culture of excellence.”

Vasquez has gone from being relatively unknown to a household name. A video of her cross-examination by Heard went viral on social media, and she gained a lot of fans during the trial.

The lawyer recently reacted to her newfound fame during a visit to Good Morning America.

“It was surreal and, to be honest, a little overwhelming,” she admitted. “But if I can be an inspiration to young women who want to go to law school, study and work hard, then it was worth it.”