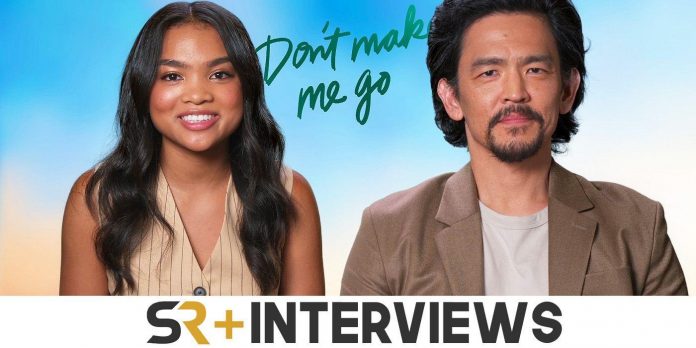 The touching narrative of “Don’t Make Me Go” revolves around Max performed by John Cho and Wally performed by Mia Isaac, a father and daughter duo embarks on a journey from California to New Orleans. Max’s inoperable brain tumor means his time on Earth is limited, and he decides to take Wally across the country to meet her mother and teach her about life.
The Prime Video film, which was directed by Hannah Marks (who previously directed Mark, Mary and Some Other People), also starred Jermaine Clement, Otis Dhanji and Josh Thomson. Cho is best known for his role as Sulu in the 2009 films Star Trek and 2013’s Star Trek: Retribution, as well as for his role as Harold Lee in the films Harold and Kumar. Recently, the actor starred in the Netflix series “Cowboy Bebop”. As for Isaac, the film “Don’t Make Me Go” marks her first appearance in a feature film.
Related: Has Star Trek’s Sulu always been gay? Everything is complicated
Screen Rant talked to Cho and Isaac about building their on-screen father-daughter relationship.
Screen Rant: John, your character Max is in a situation where he sincerely tries to get close to Wally, but she, being a typical teenager, gets into trouble. How does he use these difficult moments to help his daughter grow up and maintain a good relationship with her?
John Cho: He’s trying to do what he wants, but that’s not how life works, and that’s not how independent people work. He has to sort of acknowledge the fact that his daughter is not a prop, that she is not going to just say the lines in the play he wrote. Once he comes to terms with it, I think the relationship blossoms.
I like how much realism there is in Wally when he was an American teenager. Mia, how did you approach the game through the character development that Wally is going through?
Mia Isaac: I don’t think it was something I necessarily needed to work on, as it was just something that was real to me. I was 16 when I auditioned and I turned 17 when we were filming, so I was at about the same point in my life as Wally. So it was easy for me to play in these scenes where she reveals herself, because I was discovering myself.
Many times I’ve been in a state where I’ve come to terms with some of the things that Wally was, so playing was a great way for me to express my personal emotions and feelings. I think it was really great and I feel lucky that I managed to do it.
You two are at very different stages of your careers. What was the best thing about working together and what did you learn from each other?
Mia Isaac: I was lucky to work with John because we were like opposites in that I was so inexperienced and he was so experienced. So I felt I had to learn a lot from him that I could apply in the future.
John Cho: I really appreciated the time I spent with Mia. She reminded me of this trick, and I’m always looking for inspiration, because, you know, it’s easy to run out. It was really enlivening to work with someone I was connected to and admired as a performer and did an amazing job. I thought, “I need to match this. I need to honor this energy and this spirit.” So it was really great for me to watch her work, communicate with someone her age and build a story together.
Summary of the book “Don’t make me leave”
When single father Max (John Cho) discovers he has an incurable disease, he decides to try to squeeze all the years of love and support he will miss with his teenage daughter Wally (Mia Isaac) into the time he left with her. Promising long-awaited driving lessons, he convinces Wally to accompany him on a trip from California to New Orleans for his 20th college meeting, where he secretly hopes to reunite her with her mother, who left them long ago.
A completely original and emotional journey, “Don’t Make Me Go” explores the unbreakable, eternal bond between father and daughter on both sides of the generational divide with heart and humor along the way.
Go back to our interview with “Don’t Make Me Go” director Hannah Marks and check out our previous interviews with John Cho for Cowboy Bebop and Searching.

WhatsApp: How To Hide Messages Without Having To Leave The Conversation?