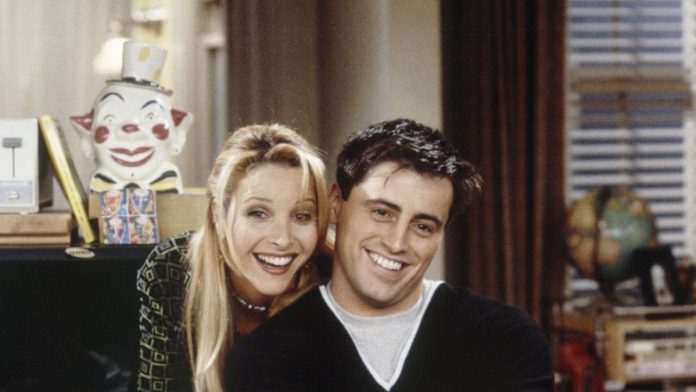 Most of the Friends characters fell in love with each other. But Joey (Matt LeBlanc) and Phoebe (Lisa Kudrow) never got there – there was a reason the writers didn’t want to form that pair in the end.

Joey was a goofy Friends character in the sense that he wasn’t smart and was focused on his looks, that worked since he was an actor. On her side, Phoebe also stood out for her crazy stories and for acting as a singer.

Joey dated Phoebe’s twin sister, Ursula (Kudrow). This made things awkward since Ursula and Phoebe don’t have a good relationship. Let’s remember that Ursula started to avoid him, so Phoebe pretended to be her sister so they broke up but then they share a kiss and Joey realizes that she is Phoebe.

Unfortunately Phoebe ends up with someone else because the scriptwriters went around with her characters. Later, Joey tries to date Rachel (Jennifer Aniston) in season 10 but she doesn’t feel the same about him and ends up with Ross (David Schwimmer).

Friends ends with Joey staying single and Phoebe getting married to Mike Hannigan (Paul Rudd), most of the fans still seemed happy for the characters. But there are some who still wonder why Joey and Phoebe never happened.

Let’s remember that Friends started with six people just being friends. But four of them paired up and became romantic, this made the writers hesitate to make Joey and Phoebe a couple too.

“It would have all been too orderly and too comprehensive,” confessed Friends writer David Crane.

See Also
Did you guess? Which of the Friends actors has more money, You will be surprised

He went on to explain that the two couples also affected how their stories unfolded, because they had created Ross and Rachel, they had to give Monica (Courteney Cox) and Chandler (Matthew Perry) another set of challenges.

It seems that having Ross and Rachel, then Monica and Chandler together led to an exchange. So they ended up agreeing that the relationship between Phoebe and Joey would not happen or the writers would risk things being too unrealistic for Friends fans.