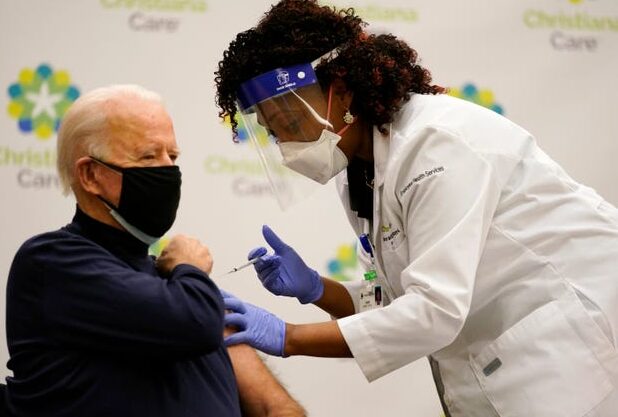 The president-elect of the United States urges citizens to get the vaccine when it is available to them.

President-elect Joe Biden received his first dose of the coronavirus vaccine on live television Monday as part of a growing effort to convince the American public that vaccines are safe.

After receiving his initial dose of the Pfizer vaccine in front of the media, Biden said his wife received the vaccine earlier that day.

“I don’t want to get ahead of the line, but I want to make sure that we show the American people that it is safe to take,” Biden said of his decision.

Biden and his wife, Jill, will also thank the healthcare workers at the facility where they receive the injections, their incoming press secretary said.

COVID-19, a controversial issue in the US

Biden’s vaccine was produced on the same day that a second vaccine, produced by Moderna, joined Pfizer’s in the nation’s arsenal.

As we reported in Somagnews, last week, senior government officials joined the first Americans to be vaccinated against COVID-19 as part of the largest vaccination campaign in the country’s history.

They chose to publicize their injections as part of a campaign to convince Americans that the vaccines are safe and effective amid skepticism, especially among Republicans.

Vice President-elect Kamala Harris and her husband are expected to receive their first injections next week.

But absent from the action has been President Donald Trump, who has spent the last week largely out of sight as he continues to be locked in electoral defeat and comes up with increasingly outlandish plans to try to stay in power.

It’s an approach that has baffled some top aides who see their silence as a missed opportunity for the president, who leaves office on January 20, to claim credit for helping to oversee the rapid development of the vaccine and polish his legacy.

Trump, who has spread misinformation about vaccine risks in the past, has not said when he intends to get vaccinated. He tweeted earlier this month that he was “not scheduled” to take it, but said he hoped to “do it at the right time.”