Home Celebrity Jin and Suga share the secret of their friendship 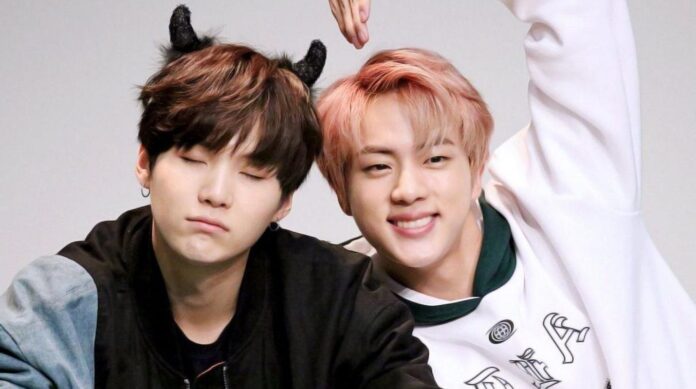 The story of the friendship between Suga and Jin allowed them to become very close despite being so different.

The boys of BTS have formed very strong bonds of friendship over time and, although they all get along wonderfully, there are some who are closer or who fit in very well from the beginning, that was the case of Jin and Suga.

The idols who train within a company share much time together, but also the experiences and feelings that face tend to be similar, there are few people who can understand how they feel as they pursue their dream, so it is easy to form a friendship with your companions.

Jin and Suga have very different personalities, which could cause their marriage not to be so easy, but these idols have confessed that it was just that that allowed them to get closer, since they are so different that they manage to complement each other.

According to them, the secret of their friendship is that everything happens naturally , they can have long conversations on the subject and it will never become uncomfortable, so they both have great confidence and feel free to show themselves as they are.

But also, Yoongi and Seokjin were roommates for a long time, which allowed them to know more about each other. One of the things they learned during this time was to recognize each other’s limits , which they have respected in a simple way, making their relationship avoid misunderstandings.

Previously, Jungkook and Taehyung also described what their friendship is like and what is the reason why they never fought, information that has made their followers very happy because they can see the good relationship that all the members of the group maintain.

NICKI MINAJ HAS A MESSAGE FOR ARIANA GRANDE