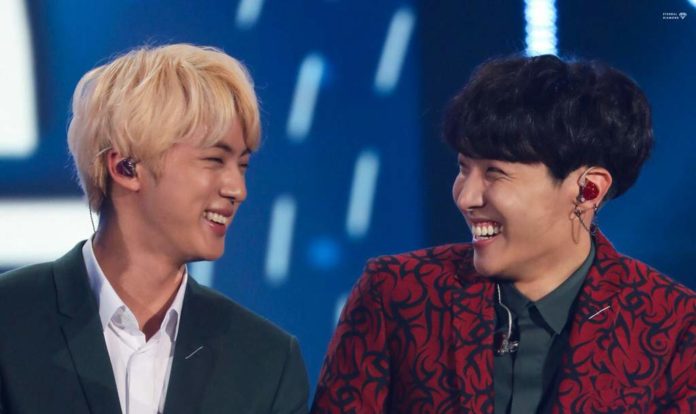 Jin reveals the real reason for J-Hope’s smile. Once again BTS’s hyung proves that his sense of humor is hilarious.

The Weverse platform is full of incredible moments, where fans and BTS members live side by side.

One of the followers of BTS published in Weverse , a gif where J-Hope and RM are appreciated , the second approaches Hoseok and says something to his ear, any secret ?, we do not know, because the leader of BTS covered his mouth with his hand, immediately Hoseok turned to the camera and smiled.

In the description ARMY placed, a koala emoji, which would refer to RM and a squirrel to refer to Hoseok :

RM : ‘that’s the person who likes you’, J-Hope in response shows a big smile.

Owww, but Jin cut this romantic moment by commenting on the follower’s post by doing an edit on the description , Jin wrote:

RM : That’s the person who blew a gas in the classroom!

To which J-Hope would smile at the rapper’s joke .

The fans responded with a lot of laughter, hinting at the great humor Jin has in any situation, some others said that despite being the largest member of the group, he is a very funny boy .

WHAT DO YOU THINK OF JIN’S PARTICULAR VISION?

See Also
J-Hope: 5 Iconic Moments When On The Stage

Meghan Markle and Harry: their solution for security costs in Canada