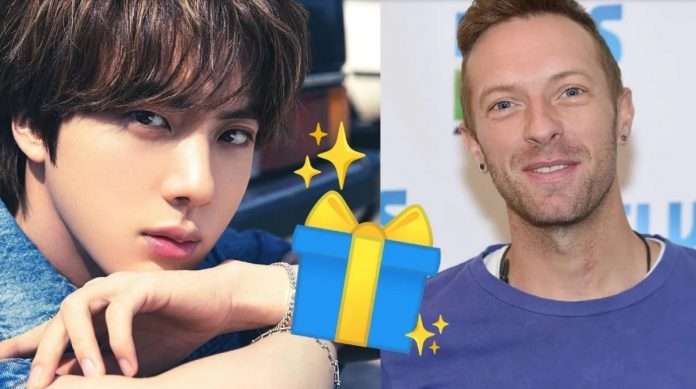 BTS guys met Coldplay and created great memories, Jin even got a gift. The long-awaited BTS and Coldplay collaboration was finally released but alongside My Universe came fascinating feats as well.

When ARMY found out that Jin’s behind-the-phone photo was with Chris Martin, the excitement peaked, but as more details were revealed of their song together it was inevitable to anticipate new interactions between the artists.

Coldplay and Bangtan Sonyeondan got together recently but also, Seokjin shared with the world a photo with a beautiful story behind it and again showed us the good connection they had with the performers of Yellow .

It is a photograph where he and Chris Martin appear posing next to a guitar , the joy on their faces is incomparable and it was even cooler to know how this photo came about.

THE GIFT THAT JIN RECEIVED FROM CHRIS MARTIN

According to the BTS member , when he saw the Coldplay vocalist perform with said guitar, he had nothing but good comments, both for the artist’s performance and for the colorful musical instrument.

Chris thanked him for the gesture but also decided to give him his guitar with a watercolor smoke effect as decoration. As if that were not enough, the singer put a special dedication and recorded his autograph with the legend: Jin worldwide handsome.

The idol has turned heads, not only has he represented South Korea with BTS in multiple large-scale events and together with great figures, recently EPIPHANY also appeared in the trends and these are just some samples of the great popularity and talent of the idol by HYBE.

FF7 Cut Out a Disturbing First Meeting with Sephiroth