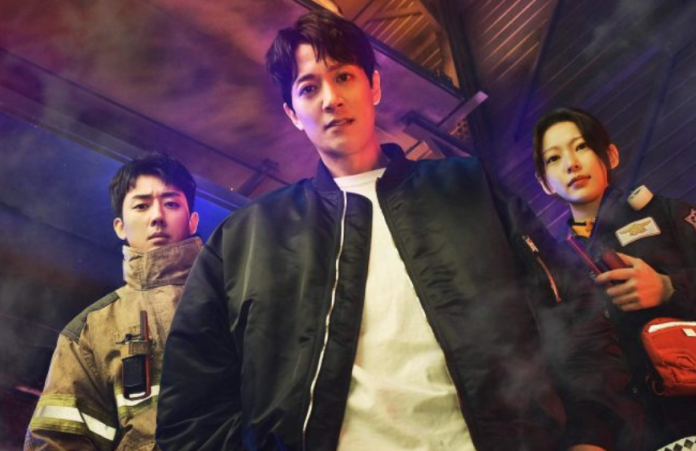 SBS has released a new trailer for its upcoming drama “The First Responders.”

The four—minute visual sequence begins with the introduction of the main characters of the series – policeman Jin Ho Gae (played by Kim Rae Won from L.U.C.A.: The Beginning) participates in a police chase on his motorcycle.

Elsewhere, firefighter Bon Do Jin (played by Song Ho Jun from The Uncanny Counter) rescues people and fights a deadly fire, while paramedic Song Seol (played by Gong Seung Yeon from Bulgasal: Immortal Souls) reacts to all forms. emergency situations in the city.

The trailer ends with a list of incidents that the trio responds to and investigates — from kidnappings and life-threatening situations to strange accidents and violent crimes in the city.

The First Responders follows the story of a police officer, a firefighter and a paramedic who together investigate cases and respond to emergencies in the city. The series is scheduled to premiere on November 12 on SBS, and new episodes will be released on Fridays and Saturdays. The series will also be available for streaming on Disney+ in some regions.

“The Fast Responders” also got the green light for the second season, which is scheduled to premiere next year. More details are expected to be revealed in the coming months.

As for other Korean drama news, Netflix has released a teaser trailer for the second part of “Money Heist: Korea – Joint Economic Area“. The new visual follows the robbery group’s attempt to escape from the United Mint of Korea, while the North and South Korean task force discovers that the robbery group has an assistant helping them from outside.

According to the new trailer, the premiere of the second part of “Money Heist: Korea – Joint Economic Area” will take place on December 9 exclusively on Netflix.

Omori: how to get batteries