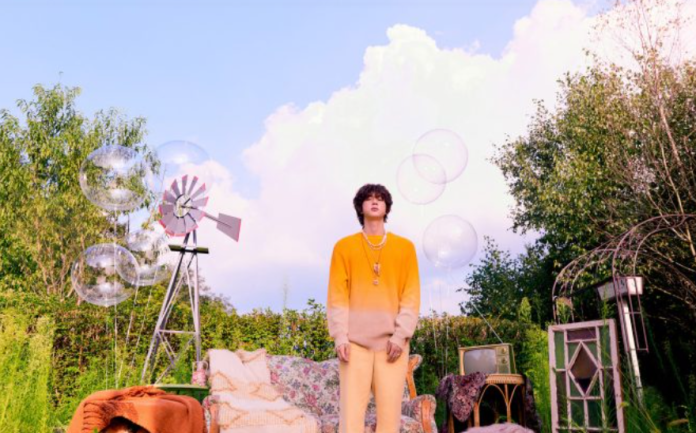 Jin’s solo single from BTS, “The Astronaut”, sold over a million copies within 16 days of its release.

According to the South Korean music tracker Circle Chart (formerly known as Gaon Music Chart), as of November 12, more than 1,024,382 copies of “Astronaut” were sold, and in the week from November 6 to November 12, 224,390 copies were sold. The Korea Economic Daily adds that “The Astronaut” has become the fastest soloist album to exceed one million sales in the history of the Circle Chart.

This feat also makes Jin the third solo artist to sell over a million copies of an album, after EXO’s Baekhyun (with the mini-albums “Delight” and “Bambi”) and singer Lim Young Woong (with the studio album “Im Hero”).).

“Astronaut”, co-written with Gene and Coldplay, marks the latter’s second collaboration with the titans of K-pop or a band member. The track, released in October, debuted live at the Coldplay show at the Estadio River Plate Stadium in Buenos Aires a few hours after the official release.

From other news: BTS were nominated for three separate awards at the 65th Annual Grammy Awards. The septet claims the title of best pop performance by a duo/group for the third year in a row with “My Universe”, their joint single with Coldplay.

BTS also received an Album of the Year nomination as an artist on Coldplay’s “Music of the Spheres”, in which members J-Hope, Suga and RM are listed as songwriters. The septet also claims to be the best music video with the song “Yet To Come” from their anthology album “Proof”.

The 65th Grammy Awards Ceremony will be broadcast live from the arena Crypto.com in Los Angeles on February 5, 2023. The ceremony will be available to watch on the Paramount+ streaming service and on the CBS Television Network.