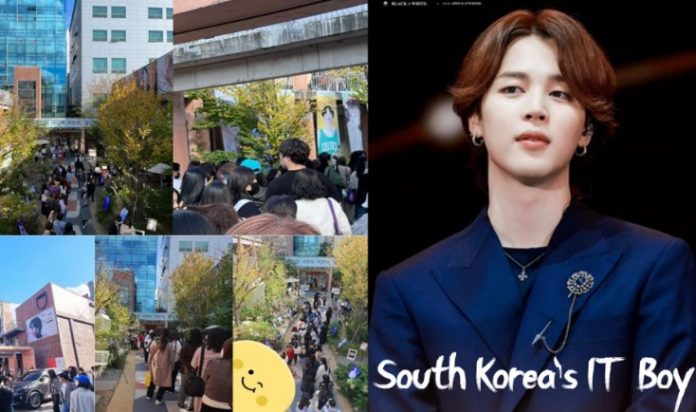 Jimin is known for his popularity all over the world due to his many first-class skills, beauty and charming personality. However, its popularity, especially in South Korea, is on a different level. He has proven time and time again that he is the country’s favorite idol due to his influence on the economy, culture and tourism of the country, as well as due to the huge level of support he enjoys in the country, perhaps having the widest fan support for any individual idol. in the k-pop industry. His supreme status as a favorite among Koreans once again demonstrated the response received by projects dedicated to his birthday.

Among the many projects that were prepared by the Korean fans of Jimin to celebrate his upcoming birthday, one of them included a grand celebration involving the “Chiminland” in Seonsu Yeongbang, which is considered a hotspot of Seonsu-dong. Read more below.

After the project was launched on October 7, a huge number of visitors came to the place to take part in the celebration and express their support for Jimin. According to the site visitors and event organizers, the number of guests on the first day was much higher than they expected, and the attendance on the second day increased even more than on the first day! Long lines could be seen in the hall as fans waited their turn to take part in activities such as taking photos at the Jimin photo booth, as well as at a pizza event, among many other stations. The hosts of the event, ALLFORJIMIN_KOR, said that some things were sold out much earlier due to the fact that a huge number of people visited the place.

Fans on Twitter also couldn’t help but be thrilled by the response, which was proof of how much Jimin is loved and adored in his native country, and what an impact he has on the public. His fans always have something to be proud of, to see how their favorite idol enjoys such great support and love from everyone. Some fans even said that “at this rate, Jimin’s birthday should be a national and/or international holiday” because it’s unheard of for a birthday to attract such a huge number of people, even on a busy working day!