Home Celebrity Jimin from BTS inspires Doja Cat with one of her most iconic... 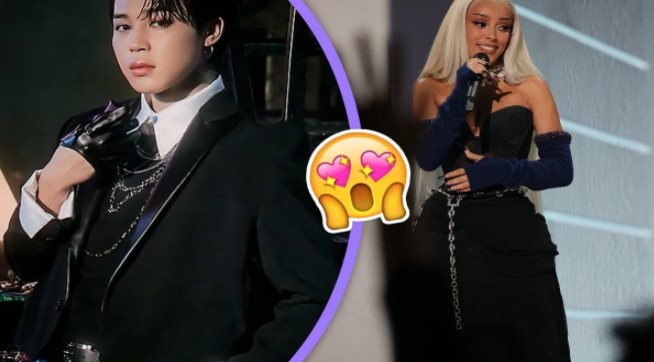 Jimin is not only an incredible singer and dancer who motivates other idols with his work, his style is also admirable and reaches the whole world, this time he inspired Doja Cat for one of his styles in the rapper’s most recent MV.

BTS has a great impact and influence that reaches fans around the world, ARMY is always inspired by his favorite idols at all times, not only for daily life, but also to do great deeds for those who need it most. .

There is much to admire about the members of Bangtan Sonyeondan and in them we can also appreciate amazing styles and visuals, the path of these artists has not only been forged in music, but also in fashion thanks to the great demeanor of all of them.

Especially Jimin, who has a great taste and fashion sense that is reflected both in photoshoots and in his airport styles; In addition to the fact that this member of the Bangtan Boys always manages to wear out the clothes he wears, the true essence of him is reflected in his looks.

Park Jimin once had an iconic look that ARMY can’t beat and it reached the whole world as he inspired Doja Cat for one of her hairstyles in her latest MV.

HOW DID BTS’ JIMIN INSPIRING DOJA CAT WITH HIS STYLE?

Doja Cat’s stylist for her ‘Get Into It (Yuh)’ MV revealed that she was inspired by BTS’s Jimin in the ‘Boy With Luv’ era to do one of the rapper’s hairstyles in the music video for her song. , this one has a futuristic concept and full of fashion; that was how it served as inspiration for a hairstyle of the singer.

Although the color is different, it is noticeable that the styles are similar, this is how Jimin not only takes over the world of music, but also the different styles in the world of hairstyles.

The stylist, named Jessica Jewel, even showed a video of her process with this hairstyle she did for Doja Cat taking inspiration from the BTS idol, from the reference photos they sent her, the color, and how I work on the wig to make a hairstyle. new but inspired by Jimin.

This was the process and the inspiration that Doja’s hair stylist had | Twitter: @PJM_data

ARMY expects a collaboration between BTS and Doja Cat, who feel closer and closer thanks to these small but significant interactions.

In other BTS news, J-Hope celebrated his birthday with ARMY in a VLive and here we leave you the best moments of him.

Joaquin Phoenix without the mask of Joker: sects, hip-hop and a...