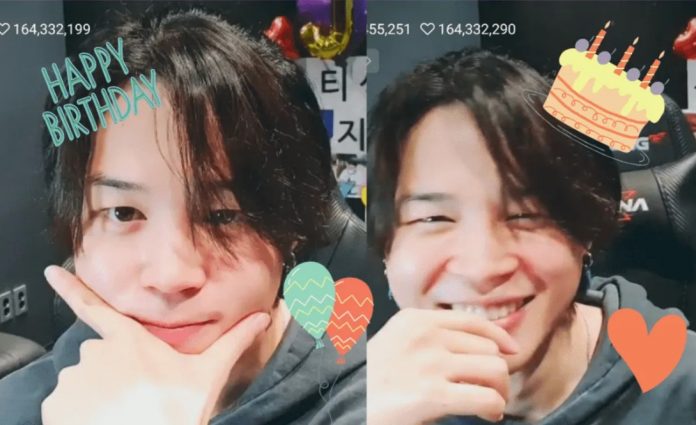 BTS’s Jimin received thousands of tokens of love from ARMY, but he returned some of that affection with a VLive. How do BTS members celebrate their birthdays? Jimin hosted a VLive and had ARMY as a special guest, talked about his new year of life, was given a cake, and answered all questions from fans.

On October 13, Jimin of BTS celebrated his birthday with all his fellow BTS and ARMY, who prepared amazing surprises and projects in all parts of the world in honor of the Korean star.

But Jimin was not far behind with a special activity for his day and as it is almost a tradition on the birthdays of BTS members, the singer met all his fans through a live video on VLive.

It showed its popularity and impact, as it gathered millions of viewers, accumulated another impressive number of likes, all this plus the comments in the chat that was full. Did you miss Jimin’s birthday live ? Next, we leave you the best moments of the transmission.

The singer prepared all the details to welcome everyone, decorated the set with photographs, happy birthday posters and others such as: Cutie sexy lovely Jimin happy birthday. At the beginning of the live he greeted everyone present and thanked them for their support, he confessed that he is the type of person who does not stay excited or aware of his birthday, even a few weeks ago he forgot.

Park Jimin is very loved by everyone around him and the staff gave him a delicious cake with a heart-shaped candle, he stopped his talk for a bit and placed the dessert in front of the camera for ARMY to see better.

He did not forget his parents and thanked them because they gave birth to him, shortly after he noticed the number of spectators and was amazed, he assured that he will live harder because of the encouragement they give him from a distance.

BTS’S JIMIN CELEBRATED HIS BIRTHDAY WITH JUNGKOOK AND J-HOPE

Some fans were left on the ground when they discovered Jimin’s new look , he left his hair long, explained that he does not have much time, since the online and face-to-face concerts of Permission To Dance On Stage are approaching, he will soon have to say goodbye to his mane.

In different excerpts from the live, Jimin mentioned that he would like to spend the day with the members of BTS and Jungkook was present, the birthday boy called Golden Maknae and asked him to visit him when he finished exercising.

Another of the special guests of the live was Hoseok , he wished Jimin a happy birthday, who shortly after said goodbye to all the viewers. He shared that he would visit his parents and post more later.

The Endgame directors have a grim explanation for the deaths of...

A Golden Ring fan has created a family tree for the...